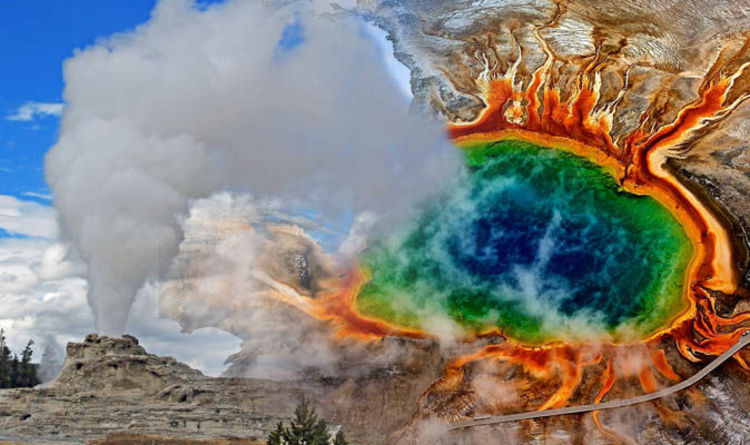 
The Yellowstone supervolcano was branded a high risk last week, in the first volcano assessment published by the USGS since 2005.

The USGS assessment ranks volcanoes in the US based on their potential destructive capability.

Yellowstone volcano was ranked a “high threat” system based on its potential eruptive power, average recurrence of eruptions and how it compares to other volcanoes in the US.

And yet despite being a high risk volcano, Yellowstone only ranked No.21 on the list.

So what exactly does this imply for future Yellowstone eruptions and the current threat posed by the fiery mountain?

The USGS assessment is not a ranking of volcanoes most likely to erupt as but rather an analysis of their potential danger.

Michael Poland, chief volcanologist of the USGS Yellowstone Volcano Observatory (YVO), said the threat level of each volcano was based on a combination of 24 factors.

This means a volcano significantly smaller than Yellowstone could be considered a much bigger risk if it is located next to a town or city.

Mr Poland wrote today in the weekly USGS Caldera Chronicles: “Threat is defined as the combination of a volcano’s hazard potential, and the exposure of people and property to those hazards.

“In other words, a volcano that only erupts lava flows but doesn’t have anyone living on it has very low threat, since even though there is a hazard, lava, there are no people or property at risk from that hazard.

“, on the other hand, and near an airport has a higher threat, since lots of people and property are exposed to the hazard, even if the hazard might be a relatively small one.”

Another 34 volcanoes are “low” risks and 21 are considered “very low” risks.

Right at the top of the list is the Hawaii volcano Mount Kilauea, which has seen an incredible period of dangerous activity on Hawaii’s Big Island this year.

The volcano shot right up to the top of the list after displacing thousands of people from their homes, destroying swathes of land and hundreds of homes in June.

Yellowstone, on the other hand, has remained in the 21st position since the last survey in 2003.

Mr Poland said: “Despite the fact that Yellowstone has not experienced any magmatic eruptions in 70,000 years, the system reached its lofty ranking, compared to other volcanoes in the country, because of the long-past history of very large explosions, more recent history of steam explosions, observed seismic, deformation, and degassing activity, and the presence of a population.”

The volcano expert said the ranking in no way indicates or predicts a future of eruptive activity at the Yellowstone caldera.

Instead, it serves for the USGS and fellow geological agencies as a guideline for which volcanoes need prioritised monitoring.

Mummies With Golden Tongues Discovered in Ancient Egyptian Necropolis : ScienceAlert
These Mysterious Fungi Belong to an Entirely New Branch on The Tree of Life : ScienceAlert
A Strange Thing Happens to Wolves Infected by Infamous Mind-Altering Parasite : ScienceAlert
Astronomers Spot The Biggest Galaxy Ever, And The Scale Will Break Your Brain : ScienceAlert
An AI Found an Unknown ‘Ghost’ Ancestor in The Human Genome : ScienceAlert