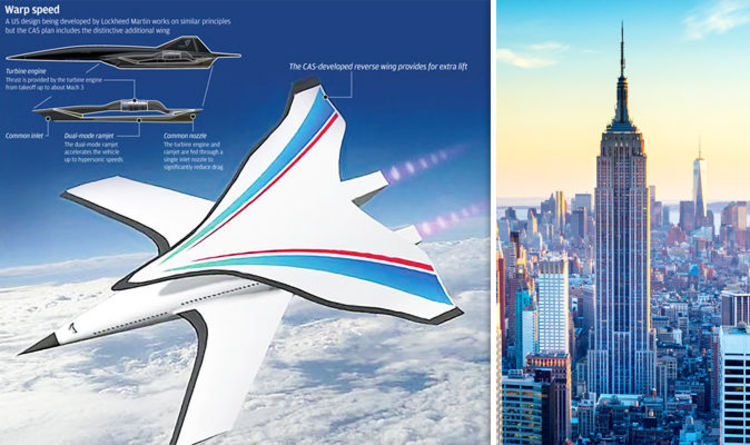 
The science team, led by Cui Kai, discussed the futuristic plane that would travel over five times faster than the speed of sound to soar across the globe.

An extract of the paper read: “It will take only a couple of hours to travel from Beijing to New York at hypersonic speed.”

A hypersonic vehicle would move so fast that it could bypass another nation’s missile defence system, adding to fears this kind of technology could kickstart World War 3.

Following the release of the paper, a Chinese aircraft designer not involved in the research declared that the plane is “something like a hypersonic heavy bomber” after declaring that it could carry “anything from flowers to bombs”.

He added: “It’s a crazy design, but somehow they’ve managed to make it work.”

The unnamed designer added that the scientific feat is part of a series of aircraft in development that had not been reported on.

He continued: “It could lead to a huge step forward in hypersonic technology.”

Current planes take around 14 hours to travel from Beijing to New York City.

The speed of sound, that would be easily surpassed by the plane if plans are put into fruition, is 343 metres per second.

In an effort to advance forms of travel, Mr Cui and the rest of his team from the Chinese Academy of Sciences in Beijing used a model of a plane in a wind tunnel to test out aerodynamics evaluations.

The tests found the model demonstrated low drag and high lift when it was put through the tunnel at up to seven times the speed of sound.

Following the test, the aerodynamic maestro was dubbed the “I-plane”.

The apt name emerged from the shape of the plane’s shadow that looks like a capital I.

I-plane has two layers of wings that utilise one another to reduce turbulence and drag.

There are still a number of issues that will need to be ironed out before the I-plane can move forward from a conceptual stage.

One of the greatest challenges facing Mr Cui and his team is overcoming the incredible amount of heat that is generated when travelling at such speeds.

It is estimated that travelling at hypersonic speed could cause the plane to reach temperatures higher than 100 degrees Celsius.

The latest research appears to put China ahead in a seeming hypersonic race between Beijing and the USA.

Lockheed Martin announced that it was making early progress on its SR-72 hypersonic reconnaissance and strike plane last year.