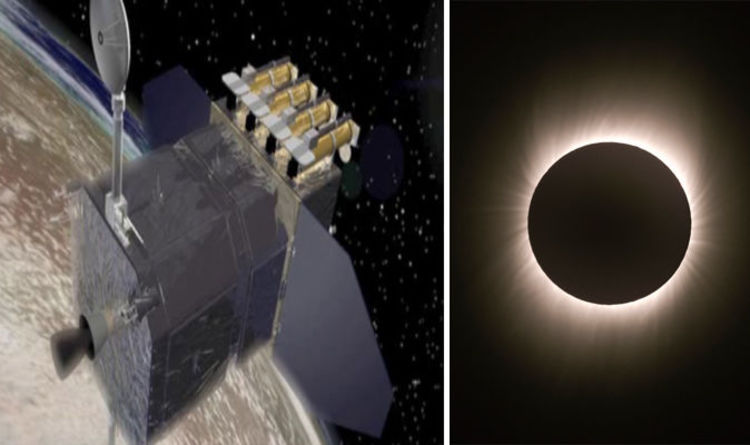 
This new year is truly chock-full of eclipses and in fact, February 10 marked the start of eclipse season for NASA’s SDO.

The next solar eclipse of the season which will be visible to us on Earth will take place on July and August 11.

But for NASA, which has a view from space, eclipses are being seen for short periods each day.

The SDO is a probe orbiting the Earth and is designed to understand “solar variations that influence life on Earth and humanity’s technological systems”.

The sun can influence technology especially as solar winds, which are a stream of particles from the sun, can heat the Earth’s outer atmosphere, causing it to expand.

The SDO has an almost eight-shaped orbit so for three weeks, twice a year, the Earth blocks out the view of the Sun.

NASA said in a statement: “SDO’s eclipse season is a three-week period that comes twice a year near the equinoxes during which Earth blocks SDO’s view of the Sun for a short while each day.

“The eclipses are fairly short near the beginning and end of the season but ramp up to 72 minutes in the middle.

“Most spacecraft observing the Sun from an orbit around Earth have to contend with such eclipses.

“SDO’s orbit is designed to maximise the amount of data the spacecraft can send back to Earth, but twice a year Earth gets in the way of the spacecraft’s view.”

Orcas Are Contaminated With a Forever Chemical Associated With an Unlikely Product : ScienceAlert
Bigfoot Has a Very Simple Explanation, Scientist Says : ScienceAlert
Ancient Goo Spills The Secrets of How The Egyptians Mummified Their Dead : ScienceAlert
No One Likes Commutes, But They May Actually Be Good For Mental Health, Study Finds : ScienceAlert
Scientists Discover a Weird New Form of Ice That May Change How We Think About Water : ScienceAlert