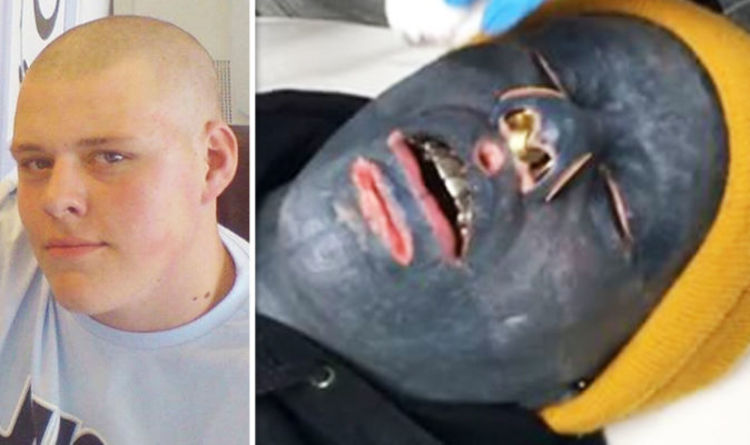 
Eli Ink, a 27-year-old tattoo artist from Brighton, has spent the last 10 years of his life transforming himself into what he considers to be a walking art exhibition.

He tattooed his mouth and the white section of his eyes in a procedure he admitted could have disastrous consequences if it went wrong.

Eyeball tattooing involves injecting ink in-between two layers of the Scleral of the eye and letting it spread out.

Eli told MailOnline: “That’s the risk you take letting anyone near your eyes, even trained surgeons can make mistake. Body modification is a risk taker’s lifestyle.”

Speaking of his transformation, he added: “In my opinion, the only person who will only ever understand my transition properly is me. I don’t attempt to describe it to anyone.

“I’ve always been blown away by art itself. Picasso is a huge childhood inspiration to me, especially abstract art, but I do like all forms of art. Body art was just the next local step for me growing up.

“I wanted to look like an abstract character in one of Picasso’s paintings. I love the abstract look, no thought, just pure expression.”

Eli’s obsession with transforming his body began at a young age when he saw his uncle return from Spain with a huge tribal tattoo.

He is part of a sub culture among body modifiers, called Modern Primitives, who pay homage to rites of passage in primitive cultures through their modifications and practices.

Speaking of the scene, Eli said it was “forever expanding its knowledge and growth, with more and more amazing artists from all over the world constantly growing and learning new things about art and the body”.

The 27-year-old also claimed his love life had not suffered as a result of his tattoo obsession, adding that his girlfriend Holly is another body modification enthusiastic who loves him.

He also declared that he was unconcerned by those who judge his work negatively.

He said: “The best is always nice compliments, that’s always nice to hear, either from tattoo collectors or just passers-by, the worst is always older generation looking down on you and making you feel worthless.”

Eli also declared that he will dedicate the rest of his life to body modification and “perfecting” his work.

Scientists Create Shapeshifting Humanoid Robot That Can Liquefy And Reform : ScienceAlert
Viagra Linked to Much Lower Risk of Death in Men, But Questions Remain : ScienceAlert
This Physicist Says Electrons Spin in Quantum Physics After All. Here’s Why : ScienceAlert
Mysterious ‘Zone of Uncertainty’ Inside The Brain Reveals a Surprise : ScienceAlert
Physicists Break Record Firing a Laser Down Their University Corridor : ScienceAlert