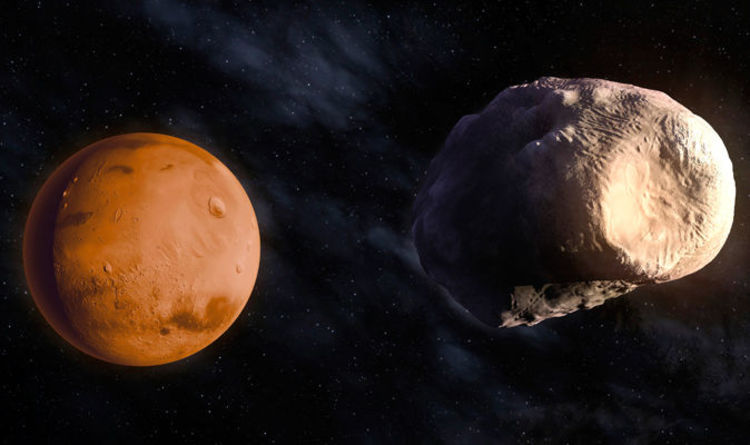 
The images used to make the video were captured using visible-wavelength light so that the human eye can view the footage.

The THERMIS camera is a feature of the orbiter Mars Odyssey.

NASA explained how the video was created, saying: “The apparent motion is due to progression of the camera’s pointing during the 17-second span of the February 15, 2018, observation, not from motion of the two moons.”

The latest footage is the second observation of Phobos by Mars Odyssey.

NASA went on to add: “Researchers have been using THERMIS to examine Mars since early 2002, but the manoeuvre turning the orbiter around to point the camera at Phobos was developed only recently.”

Mars’s moons Phobos and Deimos were thousands of miles away from the Odyssey when they were observed by the satellite.

The orbiter was built by Lockheed Martin Space Systems who collaborate with NASA to operate it.

It emerged in November that NASA’s Mars Odyssey orbiter had captured its first images of the ‘Death Star’ moon Phobos.

This is a region that could potentially one day host a human-mission outpost.

Using the THERMIS camera the orbiter collected new information about the changing surface temperatures of Phobos over a day, which revealed how quickly the ground warms and cools.

During an observation from NASA in September, they combined the visible-wavelength and infrared data to show the surface colour-coded temperature.

The data collected by the Odyssey could provide information on the mineral composition, as well as the texture, of the surface.

NASA’s stunning photos come after the space agency captured signs that Jupiter’s iconic red-eye could be dying out.

The so-called Great Red Spot (GRS), a violent swirl of crimson red on Jupiter’s surface, will likely die in the next 10 to 20 years.

Jupiter’s iconic Red Spot was first picked up by telescoped hundred’s of years ago, but its origin still remains a mystery to astronomers.

Scientists who have spent a lifetime studying the storm have now come to the unfortunate discovery that it appears to be shrinking.

Hypertension Drug Shown to Extend Lifespan And Slow Aging in Animals : ScienceAlert
There’s a ‘Lost City’ Deep in The Ocean, And It’s Unlike Anything We’ve Ever Seen : ScienceAlert
Bacteria Can Use Plastic Waste as a Food Source, Which Isn’t as Good as It Sounds : ScienceAlert
Sword Mistaken For Replica Is Actually An Ancient 3,000-Year-Old Weapon : ScienceAlert
An Expert Explains Why The Radioactive Water Stored at Fukushima Should Be Released : ScienceAlert