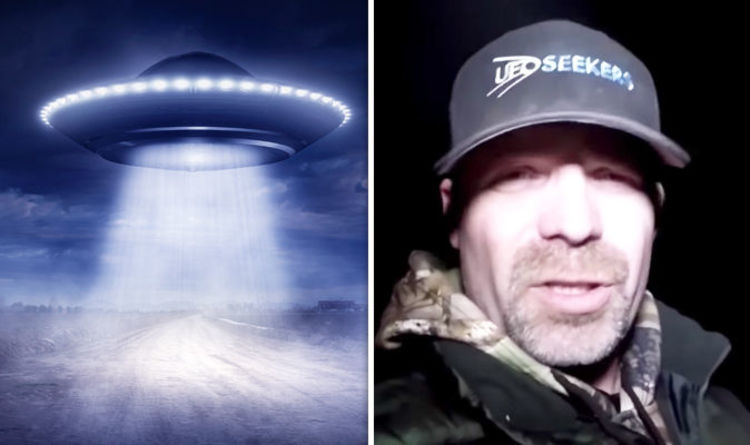 
Tim Doyle and Tracey Su revealed the images that show two jets flying above the desert in Lincoln County, Nevada, while a third object looms in the sky.

Mr Doyle said: “Tracy noticed a couple of jet fighters dog fighting, so she popped off a couple pictures.

“It wasn’t until we got back home when we started reviewing the pictures that we noticed a third object.

“What in the world is this? It looks like some kind of triangular unmanned drone. Because it’s definitely too small to have a person inside of it and after reviewing the pictures, it definitely looks as though the three crafts are interacting with each other.

The picture shows a small craft that appears to look completely different in shape to the other two in the image.

The video explained that Time and Tracy “set up camp 12 miles from Area 51″ in a desperate effort to uncover any mysterious secrets the base might have been hiding from the US public.

Mr Doyle added: “We’ll spend the night and seek UFOs and see what else happens.

“Welcome to Area 51, tonight we are UFO hunting in front of the most mysterious and secretive military installation in the entire world and we’ve got all the equipment set up tonight.

“We are taking a look at Orion’s Belt live on the television and that is coming live through our video camera here.

“We have a still camera setup where we are taking still shots repetitively to see if we see any blinking lights, maybe any dark objects, any lights out operations that might be going on.”

Area 51 is based around 80 miles from Las Vegas in Nevada.

The base is surrounded by mystery and many have claimed that it is heavily involved in top-secret projects.

Following a Freedom of Information request, the CIA acknowledged that Area 51 existed in 2013.