But scientists have long debated whether moon phases can produce big earthquakes – some theories say a full moon has the strongest tidal pull which is said to place more stress on the Earth’s crust and trigger more chance of a fault line slipping.

Is the Super Blue Blood Moon to blame for earthquakes?

A new study, produced by Susan Hough of the US Geological Survey, has come back with the single answer “no”.

Dr Hough examined 204 earthquakes of magnitude 8 or larger over 400 years and detected no significant patterns with lunar events.

She focused on larger earthquakes so as not to confuse clusters of earthquakes in the data related to other factors such as aftershocks.

This also enabled her to pare the list down to a manageable size that could be matched to lunar phase information found in online databases.

The seismologist found the links that some observers have matched between big earthquakes and lunar cycles “are no different from the kinds of patterns you would get if the data are completely random”.

Her findings were published on Tuesday in the journal Seismological Research Letters, a bi-monthly peer-reviewed publication from the Seismological Society of America.

Dr Hough went on to say her analysis did pull up some clusters of earthquakes on certain days but to test for significant patterns, she randomised the dates of the earthquakes to find out what kind of patterns would appear in the random data.

She said the patterns in the random data were no different to those showing up in the original data but said this was not unusual.

“When you have random data, you can get all sorts of apparent signals, just like when you flip a coin, you sometimes end up with five heads in a row,” she said.

In 2016, Japanese scientists analysing three separate seismic databases found large earthquakes are more likely to hit when there is a full or new moon.

But Hough has debunked this idea as myth, saying that it can gain public attention when some scientific studies show that tidal or other forces can have a slight effect on earthquakes. 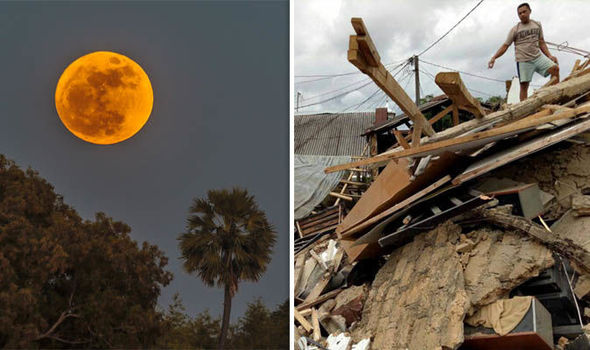 The Supermoon as seen from Thailand and the aftermath of an earthquake in Bogor, Indonesia

The geophysicist said researchers have shown “there is in some cases a weak effect, where there are more earthquakes when tidal stresses are high.

“But if you read those papers, you’ll see that the authors are very careful. They never claim that the data can be used for prediction, because the modulation is always very small.”

Earthquakes are caused by tectonic movements in the earth’s crust.

When the Earth’s tectonic plates get stuck this can cause pressure to build up beneath and when it is released, this can lead to an earthquake.

Dr Hough doesn’t believe the predictions around full moons is going to go away just yet however. 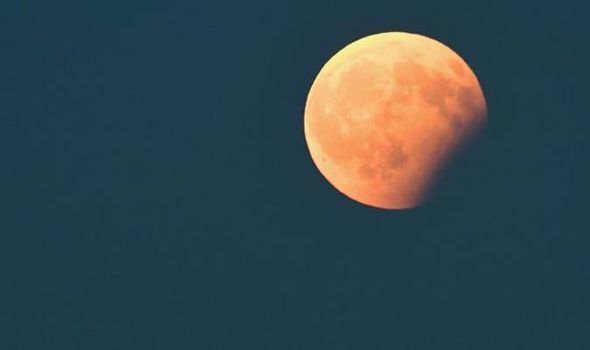 She said: “Sooner or later there is going to be another big earthquake on a full moon, and the lore will pop back up.

“The hope is that this will give people a solid study to point to show that over time, there isn’t a track record of big earthquakes happening on a full moon.”

January 31 sees a Blue Moon – the second of two full moons in a month – coincide with a full lunar eclipse.

The moon will take on a red glow as the moon passes into the Earth’s shadow, giving it the name Blood Moon.

And on top of all of that there will be a superman when the moon appears 14 percent larger and about 30 percent brighter.

A New FRB Signal Has Buzzed Nearly 2,000 Times in Just Two Months, Raising a Mystery : ScienceAlert
A Stunning New 3D Model of The Cat’s Eye Nebula May Help Us Solve Its Mysteries : ScienceAlert
Behold, The Epic Last Images Taken by NASA’s Asteroid Redirection Test Spacecraft : ScienceAlert
Ancient Maya Cities Appear to Have Been Riddled With Mercury Pollution : ScienceAlert
These Are The Most Distant Star Clusters Ever Seen, And We Nearly Missed Them : ScienceAlert