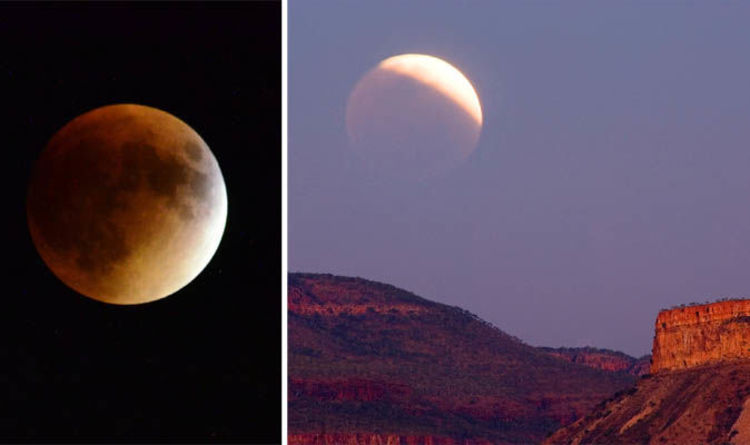 
The glowing face of the July full Moon will pass through the centre of Earth’s darkest shadow on the night of Friday July 27 and Saturday 28.

This stellar movement will mark the start of the total lunar eclipse and the emergence of the so-called Blood Moon.

The last time a lunar eclipse appeared was six months ago on the night of January 31, when the Super Blue Blood Moon graced the skies.

Unlike the full Moon and new Moon phases of the glowing orb which happens each month like clockwork, lunar eclipses only occur once or twice a year on average.

So why do the normal phases of the Moon seem so regular while lunar eclipses appear to be out of sync?

A total lunar eclipses happens when the Sun, the Earth and the Moon perfectly align for the Earths’ satellite to dip into its shadow.

But both the Earth and the Moon revolve around the Sun and each other on different, uneven planes making this necessary alignment an irregular occurrence.

When compared to the Earth’s orbit around the Sun, the Moon trajectory is slightly titled to the celestial plane.

This means the Moon is sometimes above the plane and sometimes it is below and not too often are they aligned.

The Moon’s orbit around the Earth is tilted about 5.15 degrees in relation to the plane on which the Earth circles the Moon.

If both planes were perfectly aligned with one another we would have a solar and lunar eclipse every single month.

Because of the tilt, the Moon’s path across the stars also appears to vary from month to month.

Astronomer Graham Jones, of Ten Sentences, explained: “Since the Moon orbits Earth once a month, why don’t we have 12 or 13 eclipses every year?

“I organise solar eclipse workshops for students, and this question has proven thought-provoking.

“As a result, from our viewpoint on Earth, the Moon normally passes either above or below the Sun each month at new Moon.”

According to NASA’s Goddard Space Flight Center the process is similar to that of the seasons.

Just like winter and summer arrive every sixth months so does a lunar eclipse on average.

There are however some exceptions to this rule.

Lunar eclipse data calculated by NASA’s Goddard shows the next total lunar eclipse falls on the night of January 21, 2019, but there will not be another total eclipse until May 26, 2021.

Biology Inspires a New Kind of Water-Based Circuit That Could Transform Computing : ScienceAlert
Weight Lifting in Old Age Does More Than Just Keep Your Muscles Strong : ScienceAlert
‘Unbelievable’ Video Shows 2 Bees Working Together to Open a Soda Bottle : ScienceAlert
‘Dark Data’ Is Leaving a Huge Carbon Footprint, And We Have to Do Something About It : ScienceAlert
Bitcoin’s Climate Impact Is Bigger Than Beef Farming – And It’s Only Getting Worse : ScienceAlert