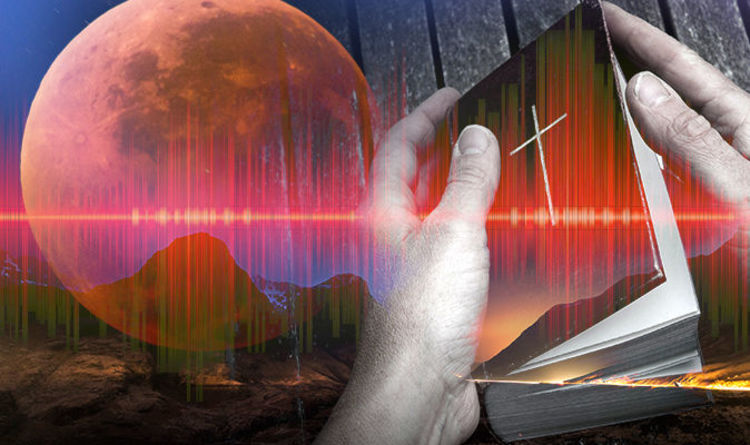 
In the early hours of January 31, the moon began to turn red as it started coming out of the shadow of Earth.

Many had linked the super blue blood moon phenomenon to a sign from God, and none more so that Pastor John Hagee, whose book Four Blood Moons sparked worldwide interest in the event.

At 9.48 local time over the Pacific, the moon began to turn red.

Pastor Hagee pointed to the Book of Joel, claiming that this was a sign from God.

Chapter Two of the Book of Joel says that the “sun shall be turned into darkness and the moon into blood” before the second coming of Jesus Christ.

Pastor Hagee said: “God is sending us a signal. Something huge is about to happen. Something is going to change, forever.

“It’s not just a single story. It’s in Genesis and repeated in Joel and again in Joshua and again in Luke and then, finally, in Revelation.

“It begins in Genesis 1:14 when the Bible says ‘Let there be light in the heavens and let them be for signals’.

“The word ‘signal’ means that God is sending us a message.

“The Bible provides a very firm basis for this. Right throughout the Holy Book it is made very clear that God does actively control the sun, the moon and the stars in order to speak to us.”

Some conspiracy theorists predicted that the eclipse would trigger massive earthquakes and volcanos around the globe due to the gravitational pull.

Website Kicker Daily News said: “During a Blood Moon event, in other words, a Lunar Eclipse (the Earth is between the sun and the moon)… try to imagine if you are the Earth, and you are being pulled by strong forces (Sun and Moon) from opposite directions.

“If you are a magma-carrying body or let’s say a balloon and you are being pulled, your ‘skin’ would be distorted, or moved (earthquake) and the precious magma inside you would escape from exit spots (volcanic eruption).”

The blood moon was a once in a lifetime phenomenon.

Behold, The Epic Last Images Taken by NASA’s Asteroid Redirection Test Spacecraft : ScienceAlert
Ancient Burial of a Young Girl Shows How We Carried Our Babies 10,000 Years Ago : ScienceAlert
Fossil-Filled Australian Caves May Be 500,000 Years Older Than We Thought, Study Finds : ScienceAlert
A Rare Condition Makes Hair Truly Untamable, All Thanks to These Genes : ScienceAlert
Diamond From 660 Kilometers Below Earth’s Surface Reveals a Water-Rich Environment : ScienceAlert