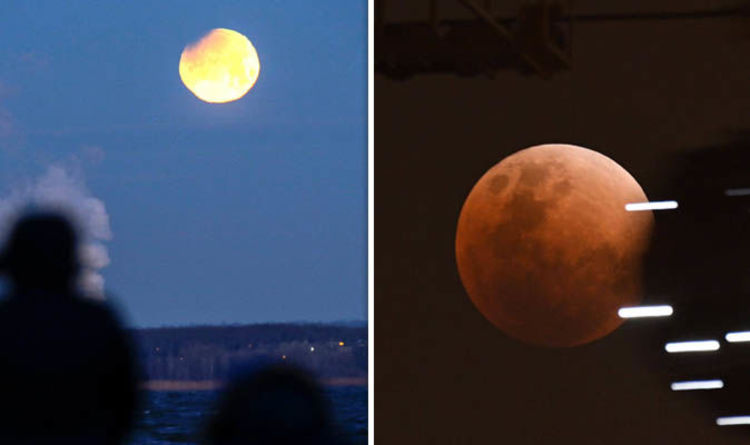 
Skygazers can expect to see a blue moon – the second full moon in a calendar month – orbiting closer to the Earth than usual.

And the event is also coupled with a total lunar eclipse for the first time in more than 150 years.

What is a lunar eclipse?

A total lunar eclipse takes place when the Earth comes between the Sun and the Moon and covers the Moon with its shadow. When this occurs, the Moon can turn red, the reason for the name Blood Moon.

A total eclipse of the Moon occurs when the Full Moon when the Sun, Earth and Moon are aligned to form a line.

The last total lunar eclipse happened in 2015 and the last time we experienced a super blue blood moon was in 1866 – more than 150 years ago.

A total lunar eclipse usually happens within a few hours and totality can range from a few seconds to 100 minutes.

In a total lunar eclipse, there are seven stages:

Even though during a lunar eclipse, the Earth blocks sunlight from directly reaching the surface of the Moon, the Moon is still visible to the naked eye.

This is because the Earth’s atmosphere bends sunlight and indirectly lights up the Moon’s surface.

What makes this lunar eclipse special is the fact the eclipsed Full Moon on Wednesday, January 31 will be a Blue Moon – the second of two full moons in one calendar month.

Supermoons happen when the moon’s perigee, its closest approach to Earth in a single orbit, coincides with a full moon.

The next lunar eclipse will happen on July 27-28 2018 and will be visible across much of Europe, Asia, Australia, Africa, southern parts of North America and South America.

Experts Estimate The Scale of The Nord Stream Pipelines Methane Leak : ScienceAlert
Bitcoin’s Climate Impact Is Bigger Than Beef Farming – And It’s Only Getting Worse : ScienceAlert
The Tonga Eruption’s 50 Million Tons of Water Vapor May Warm Earth For Months to Come : ScienceAlert
We Just Got Our Closest View of Europa in 20 Years, And We Can’t Stop Staring : ScienceAlert
Deep Brain Simulation Could Alleviate OCD When Other Treatments Have Failed : ScienceAlert