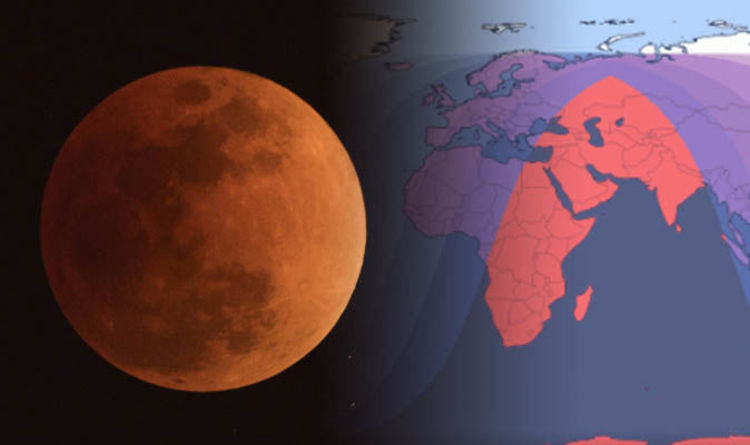 Lunar eclipses are often described as ‘blood moons’ because of the way the moon is dowsed in coppery red light.

However, Dr Daniel Brown, an astronomy expert at Nottingham Trent University, has said the term is somewhat ‘misleading’.

He said: “The term blood moon is actually quite misleading. The Moon becomes much darker and takes on an ash-grey colour – there is no extensive red colour.

“Calling it a blood moon is rather exaggerated; only after large volcanic eruptions would we expect a rusty red colour, which will not be the case this time.”

The moon’s reddish hue during a lunar eclipse is caused when the sun shines on the dust and debris floating in the Earth’s atmosphere.

Mr Brown added: “Events such as this cause us to look up and enjoy the skies above. The Moon is beautiful sight any time of the year.”

Read more: WHEN IS THE NEXT BLUE MOON?

When is the next blood moon?

The next blood moon will rise above large chunks of the planet on July 27, 2018, according to TimedDate.com.

Unlike this month’s lunar eclipse, it will be at least partially visible in the UK and western Europe.

The map below shows that the best views of July’s blood moon will be seen in Africa, central Asia and eastern Europe.

The penumbral eclipse begins at 5.14pm UTC, with full totality lasting between 7.30pm and 8.30pm.

Almost all of totality will be visible in the UK.

The duration of the full eclipse is 1 hour, 43 minutes, with the event as a whole lasting 6 hours, 14 minutes.

When was the last blood moon?

The last total lunar eclipse before today fell on September 28, 2015 and was visible over Europe, the Middle East, Africa, and America.

It was a particularly dark blood moon because of volcanic dust left in the atmosphere following eruptions by the Calico volcano a few months before.

A list of upcoming total lunar eclipses can be found below.

Wolves Really Can Become Attached to Humans Like Dogs Can, Adorable Study Finds : ScienceAlert
Deep Brain Simulation Could Alleviate OCD When Other Treatments Have Failed : ScienceAlert
Watch a Tiny Robot Blob Transform Into Even Tinier Bits to Squeeze Through Cracks : ScienceAlert
Bitcoin’s Climate Impact Is Bigger Than Beef Farming – And It’s Only Getting Worse : ScienceAlert
Superconductivity Model With 100,000 Equations Now Contains Just 4 Thanks to AI : ScienceAlert