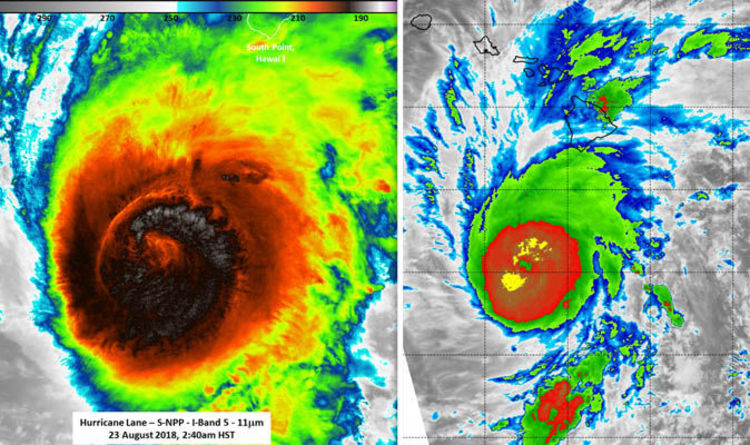 
Flash floods and lashing rains are battering the Hawaiian Islands after Hurricane Lane was downgraded on the Saffir-Simpson wind scale on Friday morning, UK time.

At 11pm Hawaii Time (10am BST) the eye of the storm was tracked about 165 miles (260km) out in the Pacific Ocean, southeast of Kailua-Kona.

The US National Oceanic and Atmospheric Administration (NOAA) said Lane was another 215 miles (345km) from the capital city Honolulu.

A hurricane warning is currently in effect for Oahu and Maui County, including the islands of Maui, Lanai, Molokai and Kahoolawe.

On Thursday, NASA provided forecasters with temperature readings collected by the US space agency’s Terra satellite.

NASA’s Terra satellite collects infrared snapshots of the massive weather phenomenon as it passes over the Pacific.

The space agency said in a statement: “On August 23 at 4.14am EDT the Moderate Resolution Imaging Spectroradiometer or MODIS instrument aboard NASA’s Terra satellite analysed cloud top temperatures in infrared light.

“MODIS found cloud top temperatures of the strongest thunderstorms northeast and southwest of the eye were as cold as or colder than minus 80 degrees Fahrenheit – minus 62.2 Celsius.

“They were embedded in a large area or storms that circled the eye where cloud top temperatures were as cold as or colder than minus 70 degrees Fahrenheit – minus 56.6 degrees Celsius.”

NASA said the heat rainfall is expected to be the biggest threat to Hawaii from Lane.

At 11pm HST (10am BST) NOAA revealed bans of rain are expected to lash the Hawaiian Islands “well ahead of Lane”.

Hurricane Lane is expected to dump between 10 and 20 inches of rainfall with local rain accumulations between 30 and 40 inches in places.

Certain locations on the windward side of Hawaii’s Big Island have already seen up to two feet of rain.

“This is expected to lead to major, life-threatening flash flooding and landslides over all Hawaiian Islands.”

Hurricane Lane’s passage by Hawaii will also bring with it damaging winds and large surf along coastlines.

The CPHS expects some storm surge and coastal erosion to follow in the wake of Lane.

A Rare Condition Makes Hair Truly Untamable, All Thanks to These Genes : ScienceAlert
Bitcoin’s Climate Impact Is Bigger Than Beef Farming – And It’s Only Getting Worse : ScienceAlert
Diamond From 660 Kilometers Below Earth’s Surface Reveals a Water-Rich Environment : ScienceAlert
Engineers Gave a Car a Pair of Eyes to Make Future Roads Safer For Pedestrians : ScienceAlert
Watch a Tiny Robot Blob Transform Into Even Tinier Bits to Squeeze Through Cracks : ScienceAlert