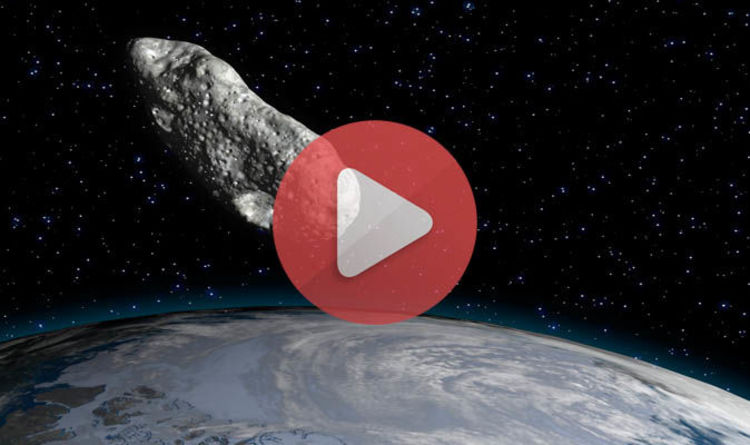 During this flyby, the asteroid will zip past the planet at breakneck speeds of more than 21,8504 mph or 9.77 km per second.

Keen stargazers might be hard pressed to spot the asteroid without proper equipment but you can watch the asteroid from your home courtesy of the Virtual Telescope Project.

The embedded YouTube live stream below will kick off late this evening live from Rome.

Here in the UK, you can tune in to the below live stream from 10.30pm BST.

The astronomy group touted its live stream as the perfect opportunity to “spy this around 600m-large asteroid” as the huge space rock blazes across the night sky.

Last week, Mr Masi snapped a photo of the giant space rock when the asteroid was approaching the planet from a distance of 3.4 million miles (5.5 million km).

The photo seen below, is a single 300-second-long exposure taken by one of the astronomy group’s remote robotic telescopes.

The telescope tracked the asteroid’s position in the starlit sky to compensate for the blurriness caused by the long exposure.

The single piercing dot of light is Asteroid FP118 itself and the surrounding blurry streaks of light are stars slowly moving across the sky.

PHAs, or “Potentially Hazardous Asteroids”, are giant space rocks which pass the planet at worrying distances.

The Virtual Telescope Project said: “The Potentially Hazardous Asteroid 2015 FP118 will reach the minimum distance from the Earth of about 4.7 millions of km.

“This is a very safe distance, so no risks at all to our planet.

“It will be a nice opportunity to spy this around 600m-large asteroid moving across the stars.”

The space agency’s calculations show FP118 will complete another trip around the Sun and visit Earth again on the night of July 6, 2025.

Physicists Finally Measure a Long Theorized Molecule Made From Light And Matter
Water Can Spontaneously Form Hydrogen Peroxide, And We Finally Understand Why
‘Structured Water’ Is Not What People Claim. Don’t Believe The Hype, Scientist Says
Warm Waters Are Rushing Towards The World’s Largest Ice Sheet, Scientists Warn