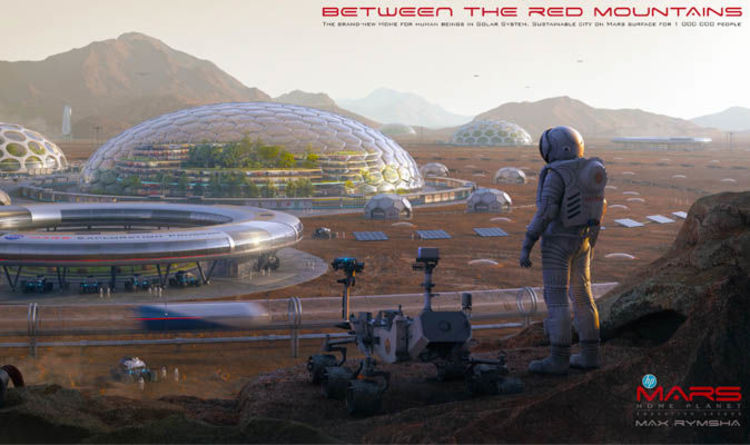 
More than 87,000 people revealed their creative side as they tried to design the perfect Mars colony in the HP Mars Home Planet Rendering Challenge.

The winning entries were hand picked from the huge array of futuristic-looking, idealistic city designs – which had to show how they could support up to one million residents.

The competition challenged participants to “reinvent life on Mars” for the next giant leapt of mankind – Martian colonisation.

Organised by tech company HP, the initiative pulled in architects, designers, artists and engineers from all over the globe.

HP said in a statement: “Every civilisation needs the resourced and skills of all its inhabitants.

“From artists, to architects and engineers, bring your unique vision to our future home planet.”

The entries envisioned a wide plethora of future Mars tech, ranging from science-fiction-like vehicles to out of this world habitats.

The winning projects were judged on how well-informed they were by the restraints of science and technical limitations but also on their creativity and coherence.

One such entry submitted by Max Rymsha, a CG artist and architect from Ukraine, envisioned a vast city partially buried beneath Mars and above the surface.

Mr Rymsha said: “Becoming our multi-planetary species is a new chapter in the history of mankind. And it is our generation that must take this step.

“We have all the tools for this, we need only inspiration and will power, so that in the next 10 years – for the first time in history, man could call another planet a home.

“Mars is the nearest planet with the best conditions for life in the Solar System after Earth. Therefore, Mars itself should be our first step on the way to other planets and stars.”

Another project dubbed Harapan, imaged a network of solar-powered bio-domes were individual Martian colonists travel around on gliders.

The submitter, Wai Kim Lam who is an architectural visualisation artist based in London, said his project was inspired by the physicist Carl Sagan.

He said: “So my process was to follow two quotes from Carl Sagan: ‘Imagination will often carry us to worlds that never were, but without it we go nowhere’ and ‘We began as wanderers, and we are wanderers still’.”

In the wake of a planet-sized dust storm raging on Mars, Mr Hembram imagined generators powered by Martian winds.

He said the machines were specifically designed to utilise the harsh condition on Mars.

You can see more of the winning designs and other submissions by clicking here.

The Moon Stole Something From Deep Inside Earth Eons Ago, and Scientists Can Prove It : ScienceAlert
Many Cat Lovers Are Giving Their Cats Unwanted Affection, Study Suggests : ScienceAlert
A Common ‘Forever Chemical’ Has Just Been Linked to Liver Cancer in Humans : ScienceAlert
Researchers in South America Discover a New Species of Tiny but Tough Dinosaurs : ScienceAlert
Minor Google Meltdown Exposes The World’s Utter Reliance on a Single Tech Company