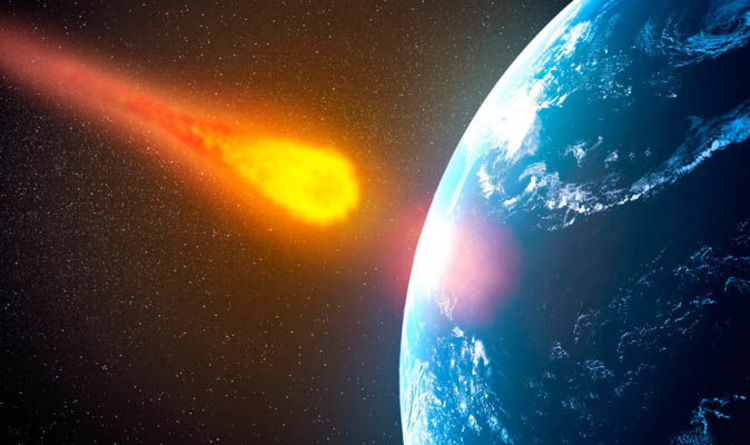 
The dead chunk of cold rock from outer space will come dangerously close to making contact with Earth on Saturday February 24, NASA has revealed.

Asteroid 2017 DR109 will appear in the night skies just after 5.18am, flying at a striking distance of almost four Lunar Distances.

According to the American space agency, DR109 will reach a minimum distance of 0.007AU from Earth – more than one million kilometres away.

There appears to be absolutely no cause for concern with the tiny asteroid which only measures a minuscule 11 metres in diameter.

The lifeless asteroid will barrel towards the planet at a speed of 7.4 kilometres per second.

Asteroid 2017 DR109 is so small in fact that it has not even made it onto NASA’s list of Potentially Hazardous Asteroids (PHAs).

NASA’s space boffins categorise PHAs as space rocks larger than 100 metres in diameter, that run the chance of coming closer to Earth than 0.05 AU.

Hundreds of these tiny asteroids whizz past the planet on a yearly basis – so many in fact, that NASA does not even naming them.

The space agency said: “Every day, Earth is bombarded with more than 100 tons of dust and sand-sized particles.

“Only once every few million years, an object large enough to threaten Earth’s civilisation comes along. Impact craters on Earth, the moon and other planetary bodies are evidence of these occurrences.”

The asteroid is just one of more than 20 to arrive in February alone.

Four asteroids flew by on Tuesday February 13, followed by another four on Valentines Day, February 14.

In fact another asteroid, designation 2018 CE14, will also appear in the skies above Earth on Saturday.

No One Likes Commutes, But They May Actually Be Good For Mental Health, Study Finds : ScienceAlert
Bar Graphs Induce a Hidden Bias in Interpretation, Experiment Shows : ScienceAlert
Astronomers Pinpoint The Mysterious ‘Engine’ of a Super-Powerful Intergalactic Light : ScienceAlert
Human Brain Organoids Transplanted Into Rats Just Passed a Major Milestone : ScienceAlert
More Life Than We Ever Realized Could Survive in The Deep Dark of The Ocean : ScienceAlert