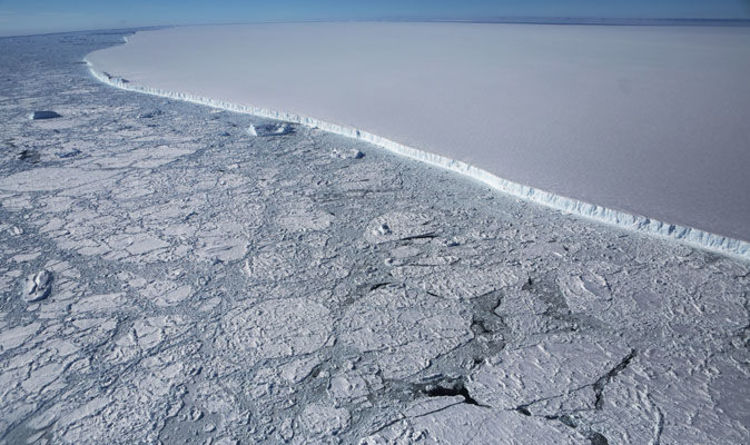 
The Antarctic’s Larsen C and George VI ice shelves have been identified as at risk of collapsing, putting the world at risk of a one inch rise in sea levels and natural disasters.

Although a one inch rise may appear relatively modest, it could contribute to a much larger problem in the future.

Dr Clemens Schannwell, who conducted the work while at Birmingham University and the British Antarctic Survey, said: “The vulnerability to change at George VI Ice Shelf and the possible sea level implications from these changes, are far greater.

“Prior to our work, we didn’t know what would happen to the upstream ice in the Antarctic Peninsula if these shelves were to be lost.

“This could have important implications for the local environment and for global sea levels, information that is essential for climate-change mitigation planning and policy.”

Together, the ice shelves make up trillions of tonnes worth of ice, and if they continue in the vein in which they have been heading they could pose a threat to coastal cities around the globe.

Last summer, an iceberg twice the size of Luxembourg broke away from Larsen C and if the whole ice shelf collapses, it could contribute to rising sea levels of four millimetres.

And if the George IV ice shelf collapses, sea levels would rise by 22 millimetres – despite the fact it is considerably smaller than Larsen C – according to the new study.

This is because George IV shields inland glaciers which would also ultimately also crumble if George IV fell.

Dr Nicholas Barrand, a glaciologist at Birmingham University, who authored the study, published in the European Geosciences Union journal The Cryosphere., said: “These numbers, while not enormous in themselves, are only one part of a larger sea-level budget including loss from other glaciers around the world and from the Greenland, East and West Antarctic ice sheets.

“Taken together with these other sources, the impacts could be significant to island nations and coastal populations.

“The Antarctic Peninsula may be seen as a bellwether for changes in the much larger East and West Antarctic ice sheets as climate warming extends south.”

Dr Barrand added: “In light of the increasing temperatures projected for the coming century, the Antarctic Peninsula provides an ideal laboratory to research changes in the integrity of floating ice shelves.

“This region can tell us about ice shelf processes and allow us to observe the response of inland ice to ice-shelf changes.

“We should view these dramatic changes in the Antarctic Peninsula as a warning signal for the much larger ice sheet-ice shelf systems elsewhere in Antarctica with even greater potential for global sea-level rise.”

Previous research has shown that Antarctica is losing 200 billion tonnes a year of ice.

Not only does the ice caps melting lead to rising sea levels, but it will contribute to more natural disasters.

Andrew Shepherd, a professor of earth observation at the University of Leeds and lead author of an earlier study published in the journal Nature, said: “Around Brooklyn you get flooding once a year or so, but if you raise sea level by 15 centimetres then that’s going to happen 20 times a year.”

A Weird Blob of Hot Gas Is Whizzing Around Sagittarius A* With ‘Mind-Blowing Velocity’ : ScienceAlert
There Are New FDA Safety Warnings About Breast Implants. Here’s What We Know : ScienceAlert
One of The World’s Largest Organisms Is Disintegrating. Here’s How We Might Save It. : ScienceAlert
The Tonga Eruption’s 50 Million Tons of Water Vapor May Warm Earth For Months to Come : ScienceAlert
Why House Fly Barf Is an Overlooked Potential Vector of Disease : ScienceAlert