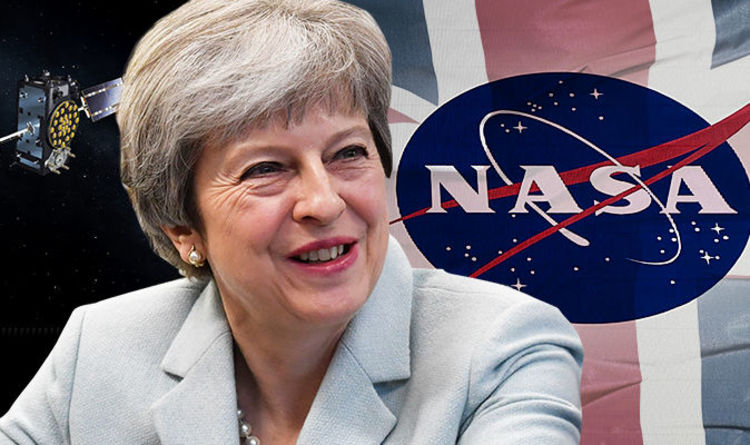 
With still no clarity on how or if the UK will be able to participate in the EU’s Galileo satellite project when Brexit is finally completed, the UK is opening its doors to other potential collaborators, rather than relying on the European Space Agency.

And “the biggest space agency in the world” is an option for the UK to partner with as both countries either side of the Atlantic look to increase their share of the space exploration market.

The UK Government has said it wants to increase its share of the global space market from 6.5 percent to 10 percent by 2030, and a NASA partnership would be a monumental boost in helping it achieve that.

The Minister for Universities, Science, Research and Innovation, Sam Gyimah, said: “The UK is well placed to be at the forefront of developments in space, and the Government are determined that we will take advantage of the vast opportunities that are available to us as a country.

“That is why I met the new NASA administrator, Jim Bridenstine, today to discuss UK-US collaboration.

“As we all know, NASA is the biggest space agency in the world, with budgets in excess of $10 billion a year.

“We discussed how to extend and deepen the opportunities for our two countries to collaborate, especially in relation to the hugely ambitious vision for exploration set out by President Trump.”

Britain has contributed a massive £1.2billion of the estimated £8.5billion cost of the experimental Galileo GPS system, with British companies playing a major part in development.

In spite of Britain’s prominent role in getting Galileo into orbit, the European Commission has said it would “no longer be appropriate” for the country to be involved following Brexit next year.

While the UK may not have access to Galileo after Brexit, it will continue to be a member of the European Space Agency – which is an independent entity.

By working with both the ESA and NASA, the UK could become one of the most powerful players in the space agency, according to Mr Gyimah.

He said: “We want to continue to be at the forefront of the next human exploration missions, working alongside NASA and the European Space Agency, but space is also a fundamental part of our economic future. The UK space sector is growing.

“It is worth about £13.7 billion to the economy according to current estimates, and it employs more than 38,000 people across the country.”

Superconductivity Model With 100,000 Equations Now Contains Just 4 Thanks to AI : ScienceAlert
Shimmering ‘Lakes’ Under The South Pole of Mars Might Be Something Else Entirely : ScienceAlert
It Turns Out There Is Such a Thing as Good Gossip, According to New Research : ScienceAlert
Biology Inspires a New Kind of Water-Based Circuit That Could Transform Computing : ScienceAlert
Control of a 6-Qubit Processor in Silicon : ScienceAlert