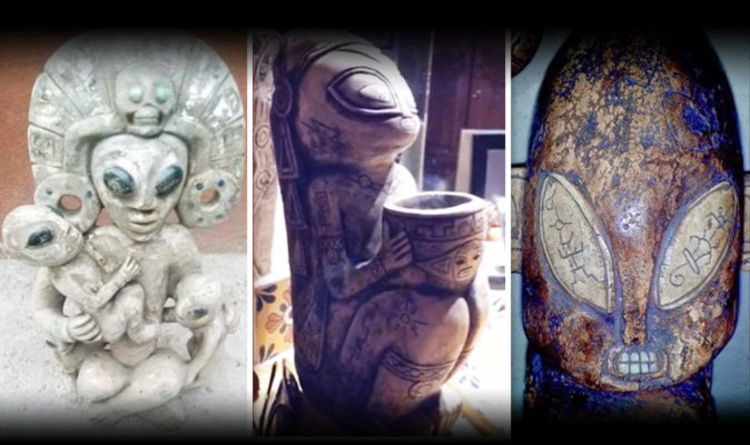 
The ancient aliens theory claims there is evidence in historical records of a race of advanced astronauts arriving on Earth and helping our forefathers build monuments such as the Pyramids of Giza in Egypt.

It is based on supposed depictions of flying saucers and alien-like beings in thousands of year old arts and crafts, coupled with the mysteries of how structures like the pyramids and Stonehenge, in Wiltshire, which were constructed with technology of the time.

Now, a video has gone viral online claims to have produced further evidence to support the alien myth.

In the video, you see a number of what appears to be Klaus Dona artefacts, which are known to date back thousands of years.

Some of the figures display alien-like figures, with long faces and round eyes.

And more sculptures appear to show spaceships floating above the ground.

Others are said to be completely unexplainable and some claim it could its proof several other races co-existed thousands of years ago.

The clip was captured in Mexico and uploaded to YouTube channel UFOmania before going viral.

Viewers have tried to get to the bottom of the mystery.

One posted: “Haven’t seen these artefacts before, but none of this surprises me. There’s a lot more to come.”

And another added: “Incredible evidence to support that extraterrestrials have been engaging the human race for a very long time.”

A third believed: “They lived on Earth for over 7,000 years and they created man.”

Others were not as convinced, stating they may not be entirely real.

A viewer pointed out: “All in mint condition, I reckon they are fake.”

Others said that just because objects in the shape of no human creatures were created, it did not mean these creatures ever truly existed.

One posted: “So, the fact that an ancient culture drew pictures and made sculptures of creatures that don’t look like any known life form on Earth proves their existence?

“Ok, so by the same logic, Centaurs, Minotaurs, Dragons, Unicorns, Satyrs, and Gryphons must all exist.”

This Seemingly Simple Foot Feature May’ve Allowed Sauropods to Become Giants : ScienceAlert
Researchers in South America Discover a New Species of Tiny but Tough Dinosaurs : ScienceAlert
‘Gifted’ Dogs Seem to Have This One Characteristic in Common : ScienceAlert
Why Do Kids Get Worms, And What Can You Do to Prevent It? : ScienceAlert
Robot Shows It’s Possible to Swim Through The Emptiness of a Curved Universe : ScienceAlert