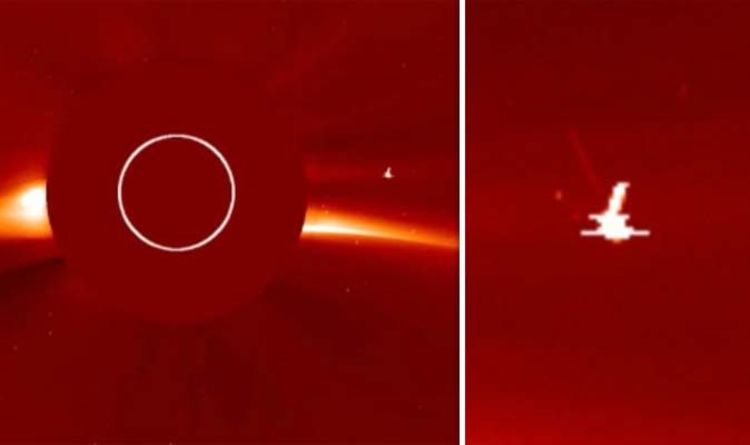 
The white spot appears in footage from NASA and ESA’s Solar and Heliospheric Observatory, dated January 19, 2018.

It appears in just one frame of the solar footage before disappearing again.

UFO enthusiasts believe aliens live and move in spaceships shaped like the small white spot on the video.

The ships are said to approach our sun to recharge energy before continuing their journeys to the furthest reaches of the universe.

Top UFO investigators claim such ships are extremely technologically advanced and could lead to breakthroughs in energy production on Earth.

Express.co.uk approached the ESA but has not been able to verify that the footage is genuine.

Jan Marzan, director of the Mutual UFO Network, believes his organisation has proved over the past 50 years that UFOs really exist.

The US-based organisation maintains a database of sightings that is updated daily, with many cases investigated. It has analysed more than 100,000 cases so far.

Mr Marzan claims: “The group’s analysis of over 100,000 UFO reports over the past five decades has shown three things to be true: One, UFOs are real; two, UFOs represent extremely advanced technology and, three, tremendous breakthroughs will happen if we make it safe for our scientists and engineers to study this phenomenon unimpeded.

“These breakthroughs involve the fields of propulsion, energy, communication, biology and consciousness, to name just a few.”

It comes after mind-boggling footage that seemed to show a mysterious UFO “blast-off” from the moon went viral online.

The short clip, filmed through a telescope, appeared to show an object propelled away from the moon and darting into space.

Diego Aviles in Mazatlán, Mexico, claimed to have recorded the footage before uploading it to his YouTube channel.

How it was later exposed as a hoax made using CGI technology, after Mr Alviles was discovered to be a talented graphic artist known for his CGI work.