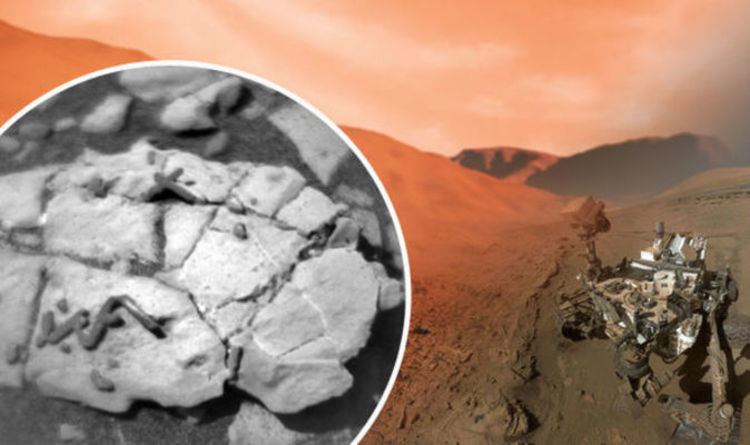 
NASA scientists sparked furious a frenzy after the US space agency tweeted about finding stick like figures.

They were snapped by the NASA Curiosity rover which is a droid currently exploring the surface of the planet and beaming back high-definition images.

“Each is about a quarter-inch long. Maybe they’re crystals? Or they could be minerals that filled spaces where crystals dissolved away. Stay tuned! Science continues.”

However, many commentators are convinced there is more to it.

Scott C Waring, who runs website ufosightingsdaily.com, believes intelligent aliens exist across the solar system and have even visited earth.

He wrote on his website: “This week NASA rover announced that they discovered ‘stick figures’, on Mars.

“However on closer inspection I find that these are not such childlike figures, but are actually fossilised worms.

“These have serious paleontological significance that would change how humanity sees the universe forever, and yet, NASA calls them stick figures.”

As a conspiracy theorist – and despite NASA releasing the images – Mr Waring is convinced the agency is not being open about the discovery.

He added: “These are fossilised worms and have many similarities to worm fossils found here on Earth.

“We don’t need NASA to declare these are fossils, however we do need a board of palaeontologists to agree on it.”

However, there have been more measured claims they could be real fossils.

Saleh_Abboud, in Leeds, tweeted about the mystery: “Or trace fossils of burrowing animals tracks.”

Researcher Barry DiGregorio has said they look “remarkably similar” to fossils “studied and photographed on Earth”.

Mr DiGregorio, who written several research papers about Mars, believes that the images taken at the start of 2018 could be similar to Ordovician trace fossils.

He said: “They look remarkably similar to Ordovician trace fossils I have studied and photographed here on Earth.

“If not trace fossils, what other geological explanations will NASA come up with?”

Mr DiGregorio is a research fellow at the Buckingham Centre for Astrobiology in the UK and author of the nonfiction books “Mars: The Living Planet” and “The Microbes of Mars.”

Ashwin Vasavada, the Curiosity project scientist, reported the features in the images are very small and only a millimetre or two (0.04 to 0.08 inches) in width, with the longest of the features stretching to roughly 5 millimeters (0.2 inches).

NASA is sending the rover back to examine them further using the MAHLI, a focusable colour camera mounted on the spacecraft’s arm.

Mr Vasavada said: “These were unique enough, given the fact that we didn’t know they were there [that] we thought we should go back.”

Mr Vasavada has not ruled out them being trace fossils, but added: “We certainly won’t jump to that as our first interpretation.”

However, he added “it’s hard to tell what the wiggly sticks are and a strictly mineral origin is, of course, the most plausible.”

Mr Lee said: “The immediate thought that came to my mind is bioturbation.”

Bioturbation is the process through which organisms living in sediments can disturb the structure of these sediments.

Mr Lee told Inside Outer Space: “A common example of bioturbation is the formation of worm burrows. The burrows, once refilled with sediments, fossilised and then exposed by erosion, can end up looking like wiggly sticks.”

Bakyt Nadyrbekov tweeted: “If scientists confirm that those traces are of biological origin, that would be greatest discovery ever made.”

Last months scientists suggested Mars may be suitable to house life, after earthworms were successfully born in simulated Martian soil.