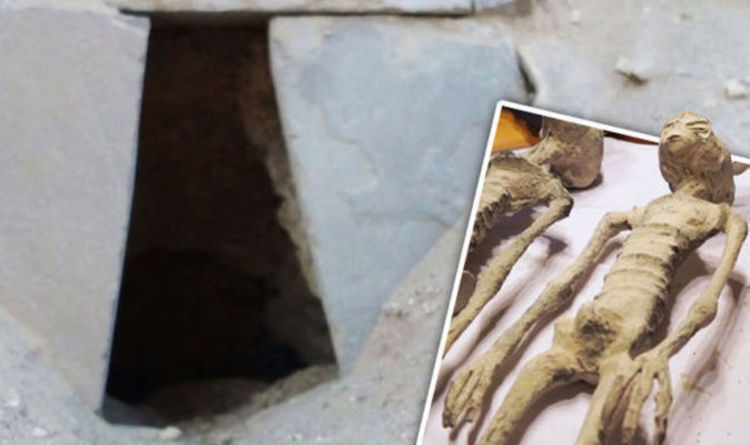 
Its sixth and last video featured scientists claiming six three-fingered and toed apparent corpses reportedly found in an ancient crypt in Nazca, Peru, had once been alive and walked the Earth.

The video, released in September, promised more news with the narrator saying: “Coming up, will DNA sequencing finally reveal the nature of these mummies? Plus further study of the elemental composition from the samples taken.”

Steve Mera is a British based UFO investigator, who is not part of the Gaia.com team, but jetted to Peru to make his own documentary about the mummies shown on YouTube.

He also promised further instalments after releasing one video in August.

Express.co.uk contacted him to see if he knew why Gaia.com went quiet.

He said: “I do… and it’s a hell of a story. We got there in the end, but not exactly what we thought.

“Sorry for the cryptic stuff, but we will reveal all to you on completion.

“Parts two and three videos of our documentary are in production.”

Other UFO buffs who had followed the case were also left in the dark.

Nigel Watson, author of the UFO Investigations Manual, who believes the videos were all an elaborate hoax, said: “I’m not very impressed by the Nazca mummies. For a start they have the implausible feature of having six fingers, and even worse they have not been investigated by respected scientists.

“No I have not heard anything.”

Jaime Maussan, a Mexican investigative journalist on the Gaia.com team, has described the mummies as “one of the most important discoveries of the 21st century” and suggested on camera they are actual alien corpses.

He said in an earlier video: “People have to understand that these kind of bodies have always been in the hands of the government and the military.

“It is the first time we have this chance and we have to take it.”

However, there has been no word from Mr Maussan on the latest developments either.

Express.co.uk contacted Gaia.com through its website to ask what has happened and posed the same question to Mr Maussan but await response.

Many have suggested the mummies were created by grave robbers who stole real ancient human remains in the area and constructed the bodies before passing them onto paranormal investigators.

The organisers of the ninth annual World Congress on Mummy Studies, which took place in Lima, Peru, in August 2016, issued an angry call on Facebook for an official inquiry into whether archaeological crimes have been committed.

Commenting on the DNA results, British UFO investigator Nigel Watson said: “It shows it has a male human skull and hands. Another fake bites the dust.”

It is understood an official inquiry was launched by the Peruvian Government.

However, in the last Gaia.com video, one of the team Dr Konstantin Korotkov, Deputy Director of Saint-Petersburg Federal Research Institute of Physical Culture, in Russia, said DNA, carbon dating, and CAT scan tests had shown they were one body that was once alive.

He said: “There is no doubt the three fingers and three toes belong to this body.

“So it was proven that it is real.”

Scientists Gave Young Mice The Blood of Old Mice. Then Things Got Weird : ScienceAlert
For The First Time, Scientists Have Named a Heat Wave. Here’s Why It’s a Big Deal : ScienceAlert
Many Cat Lovers Are Giving Their Cats Unwanted Affection, Study Suggests : ScienceAlert
These Asteroid Particles May Be Our Most ‘Pristine’ Sample of The Outer Solar System : ScienceAlert
Why Do Kids Get Worms, And What Can You Do to Prevent It? : ScienceAlert