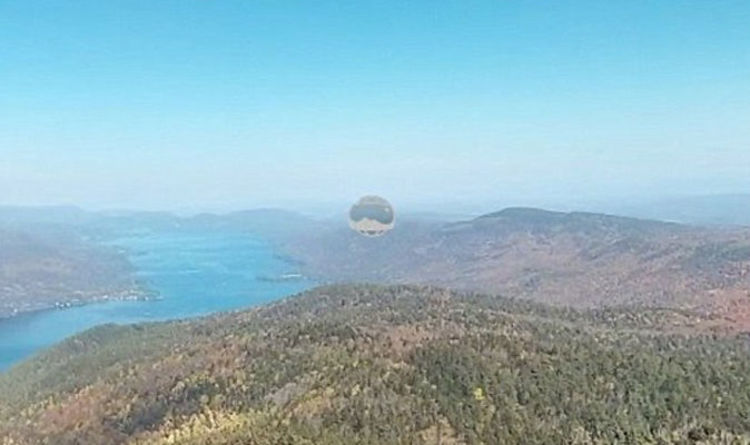 
UFO enthusiasts were quick to declare a finding although many viewers thought the mystery object was actually a drop of water on the camera lens.

Showing an idyllic landscape on Lake George, in upstate New York, the Google Earth camera pans around until the spherical object comes into view.

The video was posted on YouTube by a channel called UFOmania – The Truth Is Out There, and has been viewed 26,000 times so far.

The sphere was apparently spotted near the Vermont border, on the edge of Lake George near a radio tower at Shelving Rock.

The video narrator says: “Here is a UFO found on Google Earth today.

“Many past UFO reports described round sphere UFOs and it does seem to be the most common shape around the world.”

She said all the previous UFOs she had found on Street View had been deleted.

Many commenters on the short video were not convinced.

One said: “Water drop on lens. Shame, it looked good at first.”

Another said: “It’s a drop of water. Such a large object would have been seen by the people on the mountain.”

On a previous occasion, the Google search tool captured a mysterious shape in the Parana Delta.

A satellite image shows a circle piece of land in Argentina in which theorists believe is the hiding place for a UFO.

According to the UFO Sighting Daily, the shape is large and circular enough to fit a 100 meter UFO through it.

Writing for the site, Scott C warned “Argentina has an overabundance of UFO sightings compared to the rest of the world and I believe this is how aliens try to hide this particular entrance to their base.”

‘Funky Worm’ Fossil Helps Explain The Mysterious Origins of Amphibians : ScienceAlert
Babies May Not Be Born With a Microbiome After All, Scientists Say : ScienceAlert
People Who Don’t Exist Look More Real Than Actual People, Study Finds : ScienceAlert
Study of 500,000 Medical Records Links Viruses to Alzheimer’s Again And Again : ScienceAlert
One Simple Idea Makes It Much Easier to Manage Your Weight Over Time : ScienceAlert