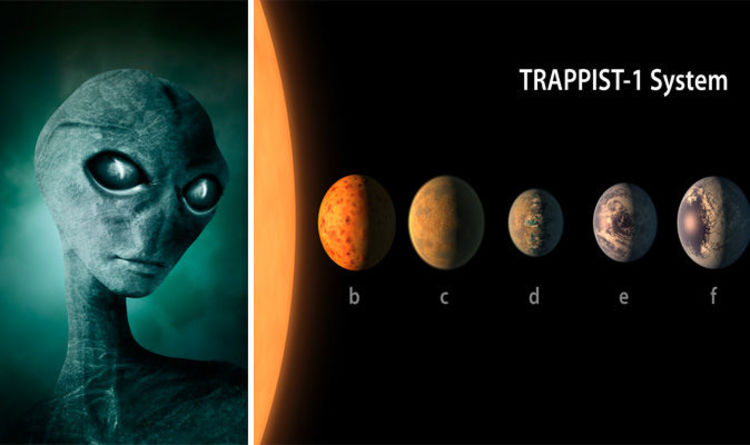 
In February 2016, NASA announced the discovery of a star known as TRAPPIST-1 which was found to have seven planets orbiting it.

The newly discovered solar system, which is the closest found to Earth, piqued the interest of alien hunters as three of its planets fall into the star’s habitable zone – the region around a host star where conditions are neither too hot nor too cold to support life.

The three planets are believed to have an ocean – and scientists state that anywhere on Earth you find water, you are likely to find life, which is why astronomers look for these on other planets.

New research has found that some of the planets in the solar system have water which makes up at least five percent of their mass.

That means there could be 250 times more water on these planets than we have on Earth – making them prime candidates for alien life.

Speaking to Space.com , Dr Simon Grimm, who led the study, said: “All the TRAPPIST-1 planets are very Earth-like — they have a solid core, surrounded by an atmosphere.”

The seven planets are named ‘TRAPPIST b’ through to ‘h’ and the researchers believe TRAPPIST-e is a particularly suitable host for aliens.

Dr Grimm added: “TRAPPIST-1e is the exoplanet which is most similar to Earth in terms of mass, radius and energy received from its star.”

The research team used a method called transit-timing variations (TTVs) to determine the masses and densities of the planets.

The technique involves watching a planet move across its host star – from the view point of Earth – which allows experts to determine how a planet is made up.

TTV analysis showed that the densities of the planets range from 0.6 to 1.0 times Earth’s density, and about five percent of that is made up of water, or thick icy layers.

Dr Grimm said: “Using TTVs is currently the only method to determine the masses and therefore the densities of planets like the TRAPPIST-1 system.”