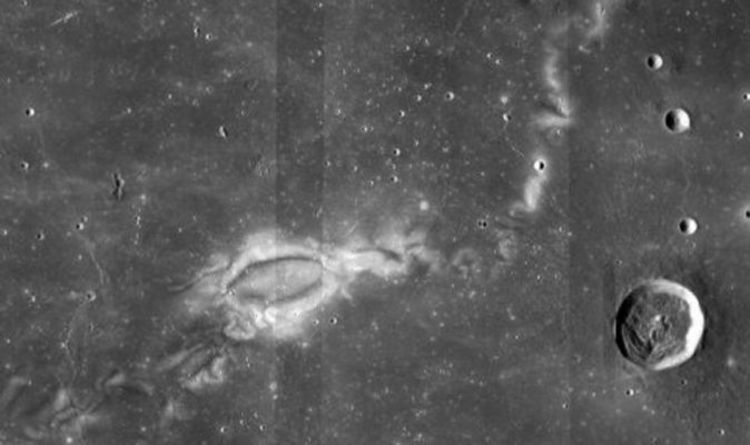 
Through a strong telescope, ‘lunar swirls’ can be spotted on the moon’s surface.

The swirls are a cloud-white colour and almost resemble a tadpole, with a large head and thin tail swirling from it.

As a result of the mystery, conspiracy theorists claimed it was proof of aliens, but scientists believe that they now have the answer.

A study from Rutgers University and University of California Berkeley has found the lunar swirls are linked to volcanic activity throughout the moon’s history.

Most lunar swirls share their locations with parts of the moon which have high pockets of magnetic field.

It is believed these magnetic pockets are better equipped at deflecting particles from outer space and cause the surface to age more slowly – meaning that lunar swirls show up because they are fresher in comparison to other parts of the moon’s surface.

Sonia Tikoo, coauthor of the study published in the Journal of Geophysical Research – Planets, and an assistant professor in Rutgers University, said: “But the cause of those magnetic fields, and thus of the swirls themselves, had long been a mystery.

“To solve it, we had to find out what kind of geological feature could produce these magnetic fields – and why their magnetism is so powerful.”

They found that lava tubes close to the surface of the moon act as “magnets” which attract more of an electrical field.

Rocks become highly magnetic when they are heated to more than 600 degrees Celsius in an oxygen-free environment.

This is because certain rocks are broken down in these searing temperatures and release more iron.

On Earth, this reaction does not happen because oxygen binds with iron and breaks it down.

The moon however is void of oxygen, allowing the iron to attract electromagnetic pockets.

Prof Tikoo said: “No one had thought about this reaction in terms of explaining these unusually strong magnetic features on the moon.

“This was the final piece in the puzzle of understanding the magnetism that underlies these lunar swirls.”