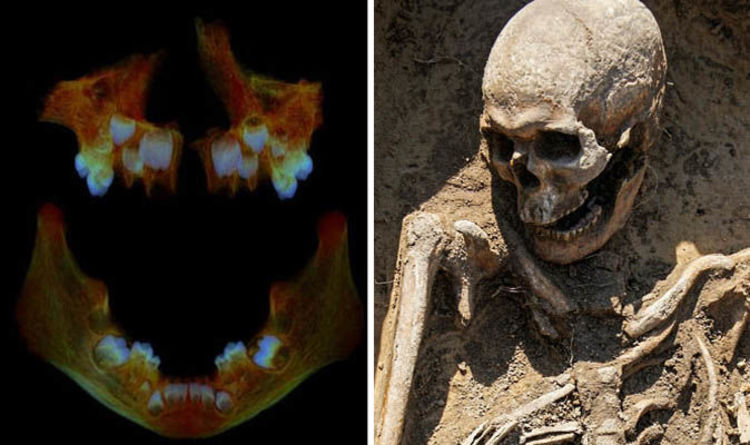 A CT scan of the jawbone of a 5-year-old Anglo Saxon child (Image: SWNS/GETTY )

They found the milk teeth of youngsters buried in a 10th century Northamptonshire churchyard were a better indicator of the risk of these conditions than bones.

It may enable doctors identify today’s most vulnerable children, leading to preventative actions in their first years of life.

The study analysed dentine, the hard bony tissue beneath tooth enamel, from the the children whose remains were dug up at a settlement known as Raunds Furnells.

Lying next to the River Nene it was established in the sixth century AD and some 300 years later a small church was erected around which there was a graveyard.

By scanning a single tooth taken from 18 children and five women, a picture emerged of development from the last three months of pregnancy onwards.

This provided a ‘proxy’ indicator, or sign, of the health of the mothers. It is the first time reliable ‘in utero’, or before birth, data has been measured in this way.

Dr Julia Beaumont, of the University of Bradford’s School of Archaeological and Forensic Sciences, says it may protect children against obesity, diabetes and heart disease.

As well as the archaeological significance of the technique she believes it has a direct application to modern medicine.

She said: “There is a growing consensus factors such as low birthweight have a significant impact on our likelihood of developing conditions such as heart disease, diabetes and obesity and the first 1,000 days from conception onwards set our ‘template’.

“By analysing the milk teeth of modern children in the same way as the Anglo Saxon skeletons, we can measure the same values and see the risk factors they are likely to face in later life, enabling measures to be taken to mitigate such risks.”

Babies’ teeth begin to develop before they are born but in most cases don’t come through until they are between six and 12 months old.

Most children have a full set of 20 milk or baby teeth by the time they are three.

The study published in the American Journal of Physical Anthropology found they gave a more reliable indicator of the effects of diet and health than bone.

Like many people of the age, the population that lived at Raunds Furnells was known to have been undernourished.

The effect of this stress is to limit the growth of bones, reducing the evidence available from analysis, such as age.

But teeth continue to grow in the normal way under such conditions. Also, unlike bone, they record high nitrogen values.

For example, this can reveal whether the protein they were exposed to in the womb and after birth came from plants or animals and how much they were consuming.

Scientist are able to detect many disease by our teeth (Image: GETTY)


This is the first time we have been able to measure with confidence the in utero (in the womb) nitrogen values of dentine.

This evidence gives a clearer picture of what is happening to the child even before birth.

The teeth are, in effect, acting as an archive of diet and health of both the child and mother.

Dr Beaumont and colleagues were also also able to look at children of different ages to see if those who survived the first 1,000 days from conception had different biomarkers for stress than those who died.

This is the high risk period during which time factors such as height and weight are set.

Dr Beaumont said: “This is the first time we have been able to measure with confidence the in utero (in the womb) nitrogen values of dentine.

“We find when bone and teeth form at the same time, bone doesn’t record high nitrogen values that occur during stress.

“Our hypothesis is bone isn’t growing but teeth are. So archaeology can’t rely on the evidence from bones alone because bone is not forming and recording during high stress and we can’t be sure, for example, of the age of a skeleton.

“Teeth are more reliable as they continue to grow even when a child is starving.”

The church and adjoining cemetery at Raunds Furrnells were discovered during the building of housing developments during the 1970s and 80s and has shed light on the burial practices of the Anglo-Saxon period.

The seeming simplicity of the church’s beginnings was deceptive. Before the first church building had been standing long, it proved too small, so a chancel was added.

A pot, used as a sacramental vessel, was discovered in front of the free-standing altar, behind which there was a clergy bench.

The boundaries of a graveyard were established around the church.

The congregation buried its dead in ordered zones, the earliest dominated by a plot, perhaps a ‘founder’s grave’, distinguished by an elaborately carved stone grave cover, and possibly also a standing cross.

It was only in the last years of the graveyard’s use, burials of young children took place in an area flanking the church walls.

Much information was retrieved about the population who for two centuries used the church, about their physical health, and about their very varied burial practices.

Although a larger church was later built on the site, it was abandoned in the 12th century.