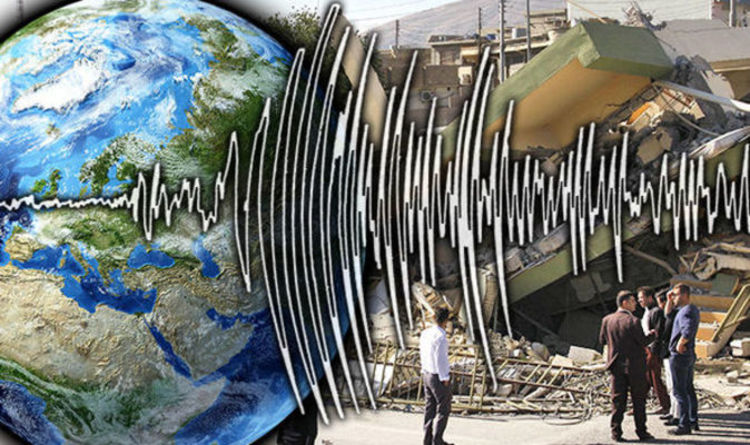 
In the last few hours earthquakes have brought terror to Alaska, Papua New Guinea, Mexico, Indonesia, Hawaii and Chile while Japan has seen the spectacular eruption of Mount Kusatsu-Shirane.

Last year, experts warned that 2018 could see more deadly earthquakes as the rotation of Earth slows down.

The speed of Earth’s rotation fluctuates extremely mildly – extending or decreasing the length of a day by a millisecond – but this tiny deceleration could have devastating consequences.

The duo found five years since the turn of the 20th century where there were significantly more 7.0 earthquakes – all of which were years that earth’s rotation speed had slowed down slightly.

Prof Bilham told the Observer: “In these periods, there were between 25 to 30 intense earthquakes a year.

“The rest of the time the average figure was around 15 major earthquakes a year.”

And this year, the Earth’s rotation speed is set to slow down leading to a jump on the six magnitude seven or higher quakes we have had this year.

Prof Bilham said at the time: “The correlation between Earth’s rotation and earthquake activity is strong and suggests there is going to be an increase in numbers of intense earthquakes next year.”

Exactly why a decrease in rotation speed can lead to more major earthquakes is unclear, but experts believe it could be down to changes in the Earth’s core which ultimately has an effect on the surface.

The team also could not say exactly where the earthquakes will occur, but Bilham suggests that a slower rotation speed will lead to more tremors on and around the equator – such as South America, New Zealand and other places that sit on top of the Ring of Fire, which is where a swarm of swarm of tremors have hit in the last few days.

Psychic Betsey Lewis has claimed that this is just the beginning of earthquake destruction.

She wrote on her website: “Something is happening to Mother Earth as earthquakes increase in size and volcanoes awaken worldwide.

“In a vision I’ve seen 2018 as a year of earthquakes and volcanoes erupting. I sense there will be a major event.”

Area 51: Does Hangar 18 exist – Is Area 51 real? | Weird | News
A Vesuvius Victim Had His Brain Turned Into Glass, Study Claims
People Are Dipping Their Testicles in Soy Sauce, So Here’s Some Science
US Army Weighs Up Proposal For Gigantic Sea Wall to Defend NY From Future Floods
Here’s What Scientists Know So Far About The ‘Novel Coronavirus’ From China