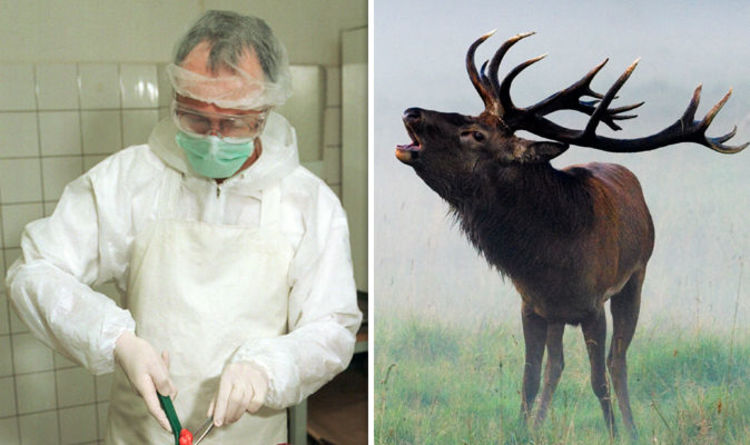 
The disease engulfing the world’s deer population is officially known as Chronic Wasting Disease (CWD) and was first discovered in 1967.

Zombie deer disease was given its name after deer starving to death were noticed in Fort Collins, Colorado, stumbling around like possessed beings.

In a study led by the Colorado State University’s Prion Research Centre, scientists said: “The infection is a contagious neurological disease causing spongy degeneration of the brain, resulting in emaciation, peculiar behaviour, loss of bodily functions and eventually death.

“It is spread by misfolded proteins, or prions, that cause other proteins to misfold around them.

“Symptoms can take up to two years to emerge after infection.”

Now, there are fears that humans who eat infected species could be at risk of catching the disease.

In an alarming revelation Matt Dunfee, Head of the CWD Alliance at Fort Collins, Colorado, said: “While most research shows there’s a robust species barrier, this recent study showed that barrier might not be quite as robust as we once thought.”

There are presently no reported cases of any humans being infected with the zombie disease.

There are concerns that is humans were to be infected with the disease, the fatal disease could cause a public health scare similar to that of mad cow disease.

In 1986 Mad Cow Disease was first discovered in the UK.

About 180,000 cattle were found infected with the condition, leading to thousands of cows being slaughtered in a bid to rid the country of the fatal illness.

A total of 156 people died in the 1990s as a result of contracting the disease.

Comparing Zombie deer disease to the condition that caused such a mass health crisis, Mark Zabel, an immunologist at Colorado State University, said they were concerned CWD would have a similar impact.

He said their research lead them “to believe that it’s only a matter of time before a CWD prion emerges that can do the same thing and infect a human.”

‘Gifted’ Dogs Seem to Have This One Characteristic in Common : ScienceAlert
Hidden ‘Hunger Stones’ Reveal Drought Warnings From The Past : ScienceAlert
Plants Have Been Keeping a Secret From Us About How Thirsty They Actually Are : ScienceAlert
Researchers in South America Discover a New Species of Tiny but Tough Dinosaurs : ScienceAlert
Thinking Hard and Long Can Cause Brain Drain : ScienceAlert