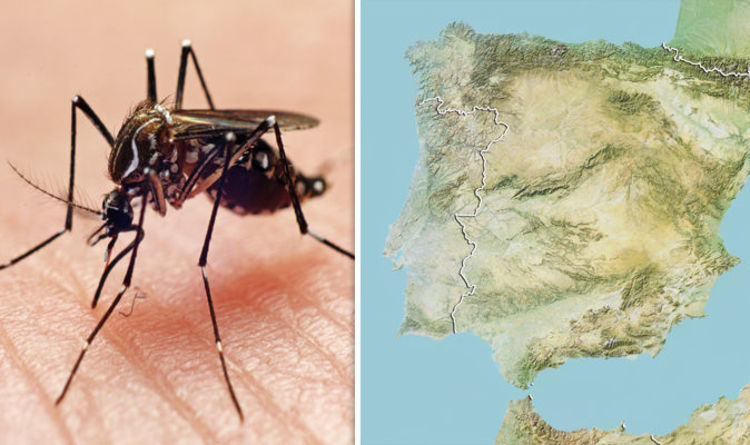 
Over the course of 2017, there has been a surge in the tiger mosquito population in Brits’ holiday hotspot Spain.

According to the Entomological Surveillance Report for 2017, more than 20 new municipalities were confirmed to have a new population of mosquitos last year.

This means that 70 municipalities in Spain are now home to mosquitos which carry the dengue, zika and chikungunya viruses.

Although the viruses are not usually fatal, they can lead to deadly ailments such as haemorrhaging if not properly treated.

The research shows the mosquitos are spreading in locations where human activity is thriving – such as Seville.

Previous research has indicated the extreme cold winter weather followed by an unusually warm spring could trigger an invasion of Asian Tiger Mosquitos in the UK.

The insects find ponds and pools of stagnant water where they lay eggs which lie dormant over winter before hatching with the flies taking to the air in spring.

Unharmed by harsh cold weather, the hardy eggs bide their time under water until the weather warms up enough for the hatchlings, or nymphs, to emerge.

Mosquito numbers are usually kept under control by damselflies and dragonflies which feed on their larvae and eggs.

However, these predators could be scarce this year because unlike their prey, their eggs are highly susceptible to extreme cold with snow and ice.

Insect bite prevention expert Howard Carter said Britain could be facing a repeat of the 2007 mosquito outbreak which saw homes and gardens were overrun by the pests.

He said: “Asian Tiger Mosquito eggs fare much better in icy conditions unlike the native insects which feed on their larvae and keep their numbers in check.

“Ice and snow keeps the eggs alive and can in fact make the adult mosquito more hardy than their predators.

“These include dragonflies and damselflies which do not fare so well in the cold weather, the very cold winter we have had could affect their numbers this summer.

“We think we could see similar conditions to the mosquito outbreak of 2007 when a very cold winter was followed by a warm spring and their numbers soared.

“It is just a matter of time before the Asian Tiger Mosquito has a hold in this country, it might not be this year but it won’t be long.”

Hypertension Inside Your Eye Could Be Making It Age Faster, Scientists Say : ScienceAlert
Colossal Exoplanet Is One of The Most Massive Super-Earths Ever Discovered : ScienceAlert
1st Detailed Study of ‘Misokinesia’ Phenomenon Shows It Might Affect 1 in 3 People : ScienceAlert
Expert Proposes a Method For Telling if We All Live in a Computer Program : ScienceAlert
The UN Just Made a Historic Climate Deal. Here’s What You Need to Know : ScienceAlert