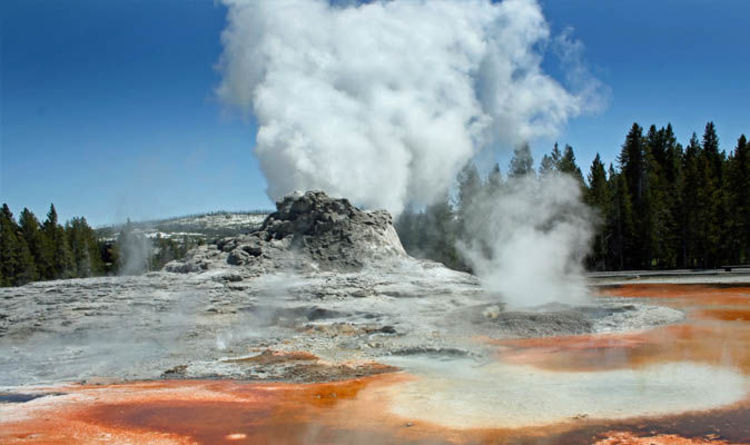 But in the deeper parts of the Yellowstone wilderness where tourists are told not to stray, toxic fumes of lethal gas are powerful enough to kill.

USGS scientists studying the Yellowstone volcano have warned of the ever-present danger in the latest issue of the weekly Yellowstone Caldera Chronicles.

USGS expert Jennifer Lewicki, who is based in California’s Menlo Park, said dozens of Yellowstone animals have dropped dead over the years as a result of inhaling toxic fumes.

The two killers are poisonous levels of carbon dioxide (CO2) and hydrogen sulphide (H2S), which are concentrating around ground levels.

Most of the gases emitted by Yellowstone’s network of hydrothermal pipes are harmless water vapour gases.

But hiding in these emissions could be concentrations of toxic gases, which have proven to be lethal to animals.

CO2 is particularly dangerous because it is an odourless and colourless gas.

H2S on the other hand is easier to spot thanks it to its distinctive smell of rotting-eggs but the gas is also colourless and flammable.

Both gases typical pool around ground levels because they are heavier than air.

This can be absolutely lethal to animal grazing in the parks fields with their noses close to the ground.

Ms Lewicki wrote: “In most circumstances, wind will dilute carbon dioxide and hydrogen sulphide to low concentrations that do not threaten the health of people and animals.

“In certain very stable atmospheric conditions, though, these relatively heavy gases can accumulate in low-lying areas and pose a serious hazard. “

This appears to have been the case in 2004 when a number of dead bison were found in the Norris Geyser Basin following a cold and still night.

The animals bore no physical markings of a predator attack and the animals appeared to have died suddenly – and as a group.

Yellowstone officials later surmised the atmospheric conditions on the night allowed for the toxic gases to pool around the animals’ grazing area, slowly killing the wild beasts. 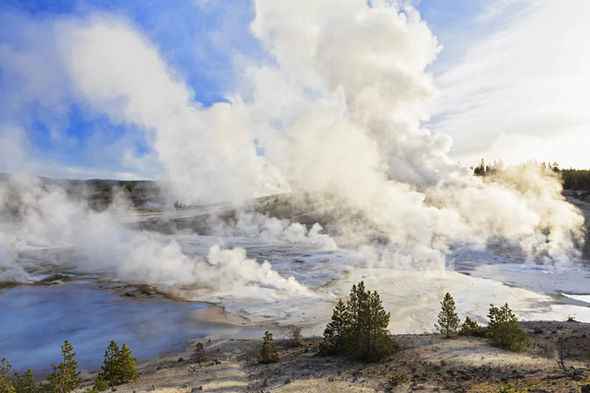 Yellowstone volcano: Most of the gas is harmless steam vapour from the system (Image: GETTY)

A similar incident was observed more than 100 years earlier in the aptly named Death Gulch part of the park were eight bear carcasses were discovered in 1897.

Hawaii Volcano Observatory founder, geologist Thomas Jaggar, speculated upon the discovery the animals died as a result of inhaling CO2 and H2S.

The US Center for Disease Control and Prevention (CDC) warns H2S is an irritating agent to the eyes and respiratory tract.

When exposed to H2S, the gas can cause damage to the nervous system, trigger unconsciousness and cause lung oedema. 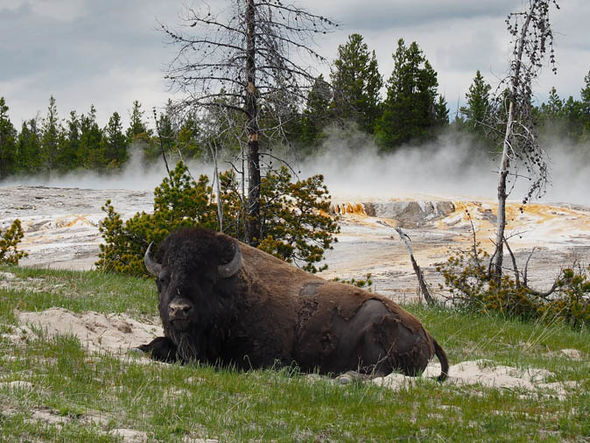 Inhaling the gas can be lethal and immediate medical attention is recommended.

CO2 can be equally harmful if inhaled, causing suffocation and unconsciousness.

The CDC said: “High concentrations in the air cause a deficiency of oxygen with the risk of unconsciousness or death. 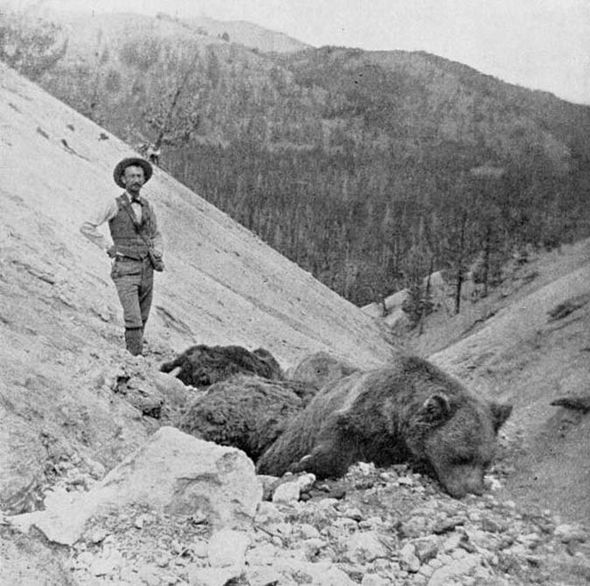 Yellowstone volcano: The first case of gas poisoning was documented in 1897 (Image: USGS)

Under most circumstances, the thousands of tourists who visit Yellowstone National Park on a daily basis have nothing to fear, however.

Ms Lewicki wrote: “Under most weather conditions, visitors will not be bothered by the gas emissions that are an integral part of Yellowstone’s fascinating hydrothermal areas.

“However, as recommended by the National Park Service, people should remain aware of potential gas hazards when exploring these areas and leave immediately if feeling sick.

“Even though there is no record of any human deaths due to exposure to gases at Yellowstone, the lessons of Death Gulch and the Norris bison provide warnings that should be heeded.”

Amazing New Fossils Provide Earliest Known Traces of The Evolution of Our Jaws And Limbs : ScienceAlert
New Discovery Means Parkinson’s Could Be Diagnosed With a Swab in Just 3 Minutes : ScienceAlert
Long COVID Is Still Raising More Questions Than Answers, Say Researchers : ScienceAlert
Bitcoin’s Climate Impact Is Bigger Than Beef Farming – And It’s Only Getting Worse : ScienceAlert
Biology Inspires a New Kind of Water-Based Circuit That Could Transform Computing : ScienceAlert