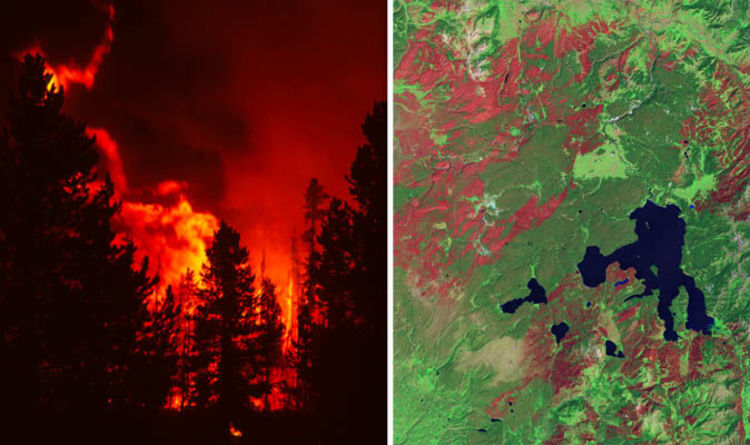 
The lightning and human caused wildfires were the single most devastating disaster to sweep through Yellowstone National Park in recorded history.

At the height of the inferno, more than 25,000 firefighters tackled 50 fires, seven of which were classed major wildfires.

When the first September snowfall blanketed the last smouldering patch of Yellowstone, more than 793,000 acres of land had been burned to a crisp.

Nearly 30 years after the Yellowstone volcano wildfire ended, space agency NASA has revealed the true scale of destruction and rebirth witnessed by the park.

In the summer of 1987, Yellowstone was still a lush and green nature reserve with dense pine forests covering the volcanic plateau.

But just 12 months later the idyllic landscape was replaced with charred trees and grasses – marked in a crimson red in NASA’s Earth Observatory infrared satellite images.

The darker red areas are the most severely burned areas and the lighters red to pink colours were less affected.

The wildfires consumed vast swathes of land and vegetation from the park’s western border up to Firehole River in northwestern Wyoming.

NASA said: “The fire was still burning when the 1988 image was acquired on August 23.

“The fires glow bright pink and a faint pall of smoke hangs over the scene.

“If the image had been made with visible light, to resemble what a person would see from the air, the smoke would be denser than it is in this infrared image.”

Trails of smoke can be seen in blue infrared colours.

The so-called 1988 Great Fires of Yellowstone lit up during the driest US summer on record.

The wildfires were fuelled by a considerable amount of dry fauna, high winds and a lack of rain.

Lee Whittlesey, a Yellowstone law enforcement ranger who worked around the clock to keep tourists out of the park in September 1988, said “everything was on fire”.

Yellowstone superintendent Bob Barbee said in 2009: “No matter what we would have done, the conditions were such that there were going to be great fires in Yellowstone under any circumstances.

“They were started by lighting, by outfitters, by woodcutters – we were a perfect setup to burn.”

According to NASA’s 1989 infrared imagery, the burned Yellowstone volcano land surrounds the world-famous Old Faithful Geyser and extended through the western parts of the park.

But the space agency said the firestorms did not burn down everything in their path.

The burned areas appear to be patchy with some of the higher elevations spared from the fire.

By September 14, 1990, the damage caused by the fire can be seen slowly fading away as new grass and flowers creep over the land.

“In 2011, the burned area is still clearly discernible, though much of the eastern portion of the image is covered once again by trees and vegetation.

The space agency said it will take decades for the Yellowstone forests to return to their former glory.

Plants Have Been Keeping a Secret From Us About How Thirsty They Actually Are : ScienceAlert
Robot Shows It’s Possible to Swim Through The Emptiness of a Curved Universe : ScienceAlert
An Experimental Surgical Robot Is Headed to The International Space Station
A Common ‘Forever Chemical’ Has Just Been Linked to Liver Cancer in Humans : ScienceAlert
Astronomers Charted The Sun’s Life, And This Is How The Story Ends : ScienceAlert