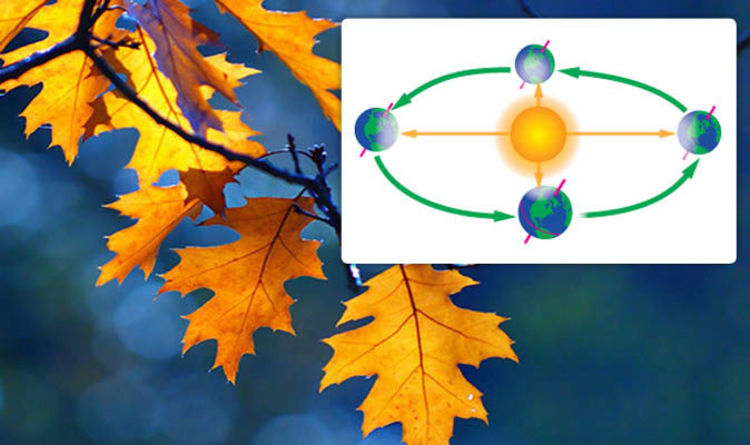 
The Autumn Equinox, also known as the September Equinox, marks the end of summer and start of autumn in the Northern Hemisphere.

The equinox does not have a fixed date and instead falls on one of four days between September 21 and September 24.

But what is certain is the days will soon get shorter and the nights will get longer, as we go from autumn to winter.

On the day of the Autumn Equinox, the Sun will pass directly over the Earth’s equator and daytime will last as long as nighttime.

When is the September Autumn Equinox this year?

The Autumn Equinox usually lands on the September 22 but this year you can say goodbye to summer on Sunday, September 23.

According to astronomer Deborah Byrd, founder of EarthSky.org, the equinox will start at 2.54am BST (1.54am UTC).

But while the astronomical season of autumn does not start until the September Equinox, and ends around December 21, the meteorological autumn falls on a different set of dates.

This year, autumn started on September 1 and will wrap up by the end of November.

Just for the sake of ease of mind, the meteorological seasons are split up into four equal, three-month-long seasons.

These are summer between June and August, autumn between September and November, winter between December and February and spring between March and May.

From an astronomical perspective, however, the seasons do not change until the Earth reaches a 23.5 degree tilt on its axis in relation to the Sun.

The steep tilt causes the Autumn and Spring Equinoxes with the Winter Solstice and Summer Solstice in between.

“In a year there are two equinoxes and two solstices.”

Temperatures in the Northern Hemisphere after the Autumn Equinox are generally expected to slowly drop because less direct sunlight falls on this part of the world.

The opposite is true in the Southern Hemisphere where the seasons are reversed and spring is just about to begin.

The dates of the equinoxes and solstices are not fixed due to the Earth’s elliptical orbit around the Sun, but the difference in dates each year is minimal.

This year the Autumn Equinox falls one day before the brilliant September Harvest Full Moon.

On the night of Monday, September 24, the Moon will light up 100 percent as it peaks in the full phase of the lunar calendar.

Scientists Have Found A New Way to Detect Alien Worlds Beyond Our Solar System : ScienceAlert
Scientists Achieved Self-Sustaining Nuclear Fusion… But Now They Can’t Replicate It : ScienceAlert
Weird Creature With No Butt May Not Be Our Ancient Ancestor After All : ScienceAlert
Clinical Trial Restored Sight to 20 People With Corneas Made From An Unlikely Source : ScienceAlert
‘Extreme Heat Belt’ to Snare 100 Million Americans in Decades, Scientists Warn : ScienceAlert