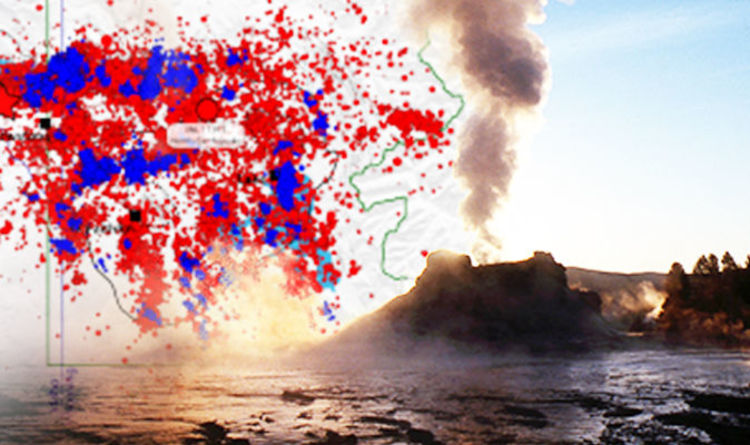 
Tremors begin to hit the National Park on February 8, ramping up on February 15 when seismic activity and magnitudes increased markedly.

On the night of February 18, the largest earthquake in the swarm was 2.9-magnitude although this was reportedly not felt.

Swarming is a frequent occurrence in Yellowstone National Park and reports indicate this region is actually a hotbed of seismic activity.

Here is everything we know about the recent earthquakes in Yellowstone.

What is causing the Yellowstone earthquake swarm?

An earthquake swarm is a higher-than-average number of earthquakes striking an area over a relatively short period of time.

Swarms typically occur without a single main shock and have two main causes: shifting at major tectonic plates or movements of water, gas or magma under the earth’s surface.

As for Yellowstone, both these reasons could be behind the recent activity.

As well as being situated on the Snake River Plain-Yellowstone hotspot, an area of tectonic activity, the region also has an abundance of hot springs and deep mud pools that gather liquid and gas beneath the surface.

Because of this, small quakes are a frequent occurrence in Yellowstone, which is typically hit by 1,000 to 3,000 quakes a year, according to the National Park Service.

The biggest quake on record was a magnitude-7.3 quake that hit Hebgen Lake in 1959.

Are the Yellowstone earthquakes about to cause the Big One?

Although the earthquake swarm is recording higher than usual activity in Yellowstone, it is not the sign a major earthquake will follow according to Michael Poland, scientist-in-charge of the USGS Yellowstone Volcano Observatory.

“It experiences swarms all the time.” He said a region’s seismic history can provide clues for why a swam has occurred, adding the area, which is near Norris Geyser Basin, is usually extra “”.

“One of the potential explanations for why this area is so  is that the whole crust in the area is still adjusting to the big earthquake in 1959.”

Will Yellowstone earthquakes cause volcano eruption?

According to the USGS, swamps like that seen in the past two weeks account for more than 50 percent of the seismic activity in the area.

And, so far, no volcano activity has occurred form any of these past events.

Mr Poland added a large earthquake is an underappreciated risk at Yellowstone – and if it were to blow, it could devastate the whole of the United States.

“People tend to focus on the possibility of a huge eruption, which is vanishingly small.”

However a magnitude-7 earthquake could happen comparatively more often, he said – adding: “When they do happen, they’re going to shake the region pretty severely, so people should be prepared for that.”

Scientists Create Shapeshifting Humanoid Robot That Can Liquefy And Reform : ScienceAlert
Losing Focus May Actually Boost Learning, Study Finds : ScienceAlert
Scientists Have a Plan to Turn Earth Into a Giant Observatory : ScienceAlert
Earth’s Inner Core May Right Now Be in The Process of Changing Direction : ScienceAlert
An Iceberg The Size of London Has Broken Free From Antarctica Ice Shelf : ScienceAlert