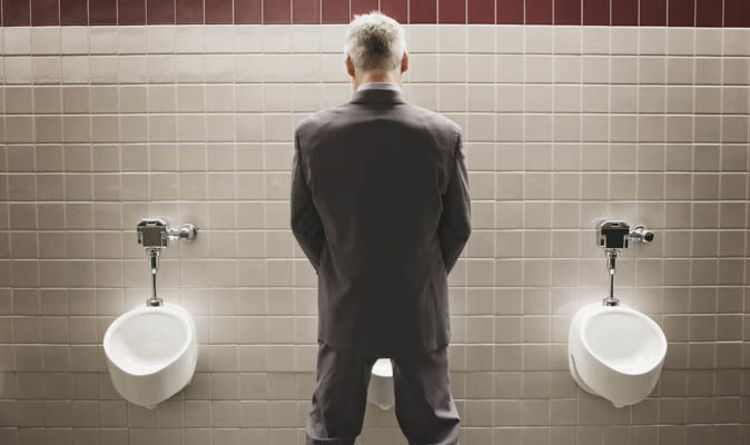 
And the answer seems to be a confusion between signals in the Autonomic Nervous System which oversees the process of urination and controls many other automatic bodily functions, such as temperature and heartbeat.

When the body is given the green light to pee receptors in the bladder wall detect the bladder stretching and activate a set of nerves in the spinal cord called the sacral nerves.

These trigger the PNS into action, which causes the muscular bladder wall to contract, preparing it to push urine out of the body.

Dr Simon Fulford, a consultant urologist at the James Cook University Hospital in Middlesbrough told science website Live Science the autonomic process works like an on-off switch, suppressing the instructive nerve reflexes while the bladder is still filling up, but “stimulating those reflexes to act when the bladder is full.”

He added: “There does seem to be good evidence that blood pressure rises slightly with a full bladder, and that this drops on voiding, or soon after.”

And it seems that this sudden dip in blood pressure triggers a reaction from the Sympathetic Nervous System, a part of the ANS that is involved in the body’s fight-or-flight response.

The SNS regulates blood pressure by releasing a series of neurotransmitters called catecholamines, and it’s believed this surge of catecholamines causes the shudder.

The twitch is basically a glitch in the nervous system when both the SNS and PNS vie to be heard. The shudder is similar to night twitches experienced by many people as they fall asleep.

‘Unbelievable’ Video Shows 2 Bees Working Together to Open a Soda Bottle : ScienceAlert
‘Dark Data’ Is Leaving a Huge Carbon Footprint, And We Have to Do Something About It : ScienceAlert
Superconductivity Model With 100,000 Equations Now Contains Just 4 Thanks to AI : ScienceAlert
3 Major Aquatic Animal Groups Can Trace Their Lineage to This Ancient Armored ‘Worm’ : ScienceAlert
We Just Got Our Closest View of Europa in 20 Years, And We Can’t Stop Staring : ScienceAlert