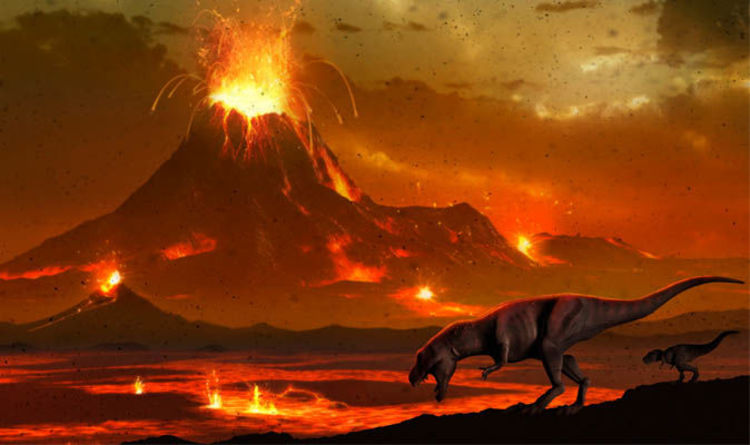 
Dinosaur experts from the University of Śląsk, Poland, think life on Earth was almost snuffed out as a result of global eruptive events around 372 million years ago.

The late Devonian extinction is one of the so-called “Big Five” – five major extinction events which struck the planet in ancient times.

One of these five major extinction events was responsible for the death of the dinosaurs.

The Devonian extinction event wiped out a staggering 80 percent of the planet’s species, but scientists were never quite sure what the exact cause was.

He said: “Up until now the main debate on this mass extinction has been what the main direct cause was.

“We provide the first clear evidence for volcanism.”

Researchers concluded the unusually high concentrations of mercury from the Devonian period of the Palaeozoic are linked to intense flows of lava in Siberia.

Dr Racki said: “Correlations between these anomalies across distances of thousands of kilometres point towards a global inflow of mercury.

“You could assume that these were gas exhalations from great lava flows on the Siberian continent – something which has been long suspected – although similar magmatic activity from around this period is known, among other, from the areas of Belarus and Ukraine.

Polish geologists found the geological samples of mercury were up to 100 times more prominent than those in samples from later periods.

In the past, similar samples of highly concentrated mercury were linked to volcanic eruptions.

According to Dr Racki, the silvery chemical has become a “fingerprint” of sorts for geologists studying the effect of volcanism on extinction events.

Study co-author, Paul Wignall form the University of Leeds, said: “Now we can say that all of the ‘Big Five’ mass extinctions coincide with major volcanic events.

“Until our discovery, this late Devonian extinction was the major exception.”

The geological study was published in the online science journal Geology.

Octopus Brains Evolved to Share a Surprising Trait in With Our Brains : ScienceAlert
People in Portland Planted Trees. Decades Later, a Stunning Pattern Emerged : ScienceAlert
Two Black Holes Met by Chance, And It Created Something Never Seen Before : ScienceAlert
Hypertension Inside Your Eye Could Be Making It Age Faster, Scientists Say : ScienceAlert
Mysterious Changes Identified in The Brains of People Who Get Migraines : ScienceAlert