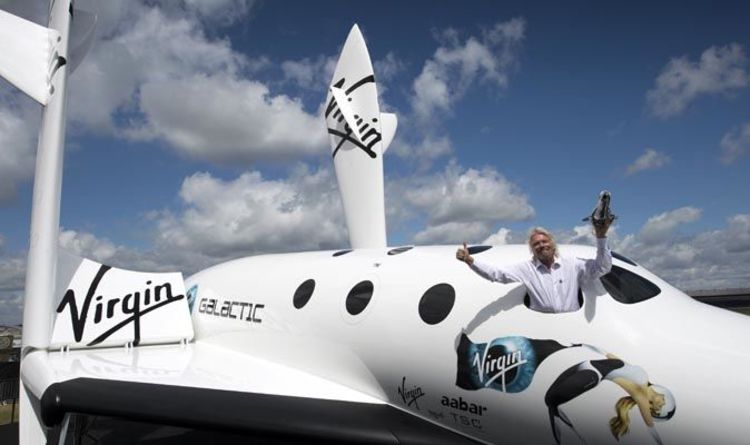 The ultimate aim for Virgin and Sir Richard is to offer affordable, commercial travel away from Earth.

Virgin Galactic is a few steps behind its main competitor SpaceX, which last month announced it will be sending its first private citizen around the moon in 2023 – Japanese online fashion businessman Yusaku Maezawa.

However, Sir Richard has not been deterred by Elon Musk’s firm, and instead are using SpaceX as a pace setter in the private race to space.

Speaking to CNBC, Mr Branson said Virgin Galactic is “more than tantalisingly close” to its first trip to space.

“We will be in space with people not too long after that so we have got a very, very exciting couple of months ahead.”

Nonetheless, Sir Richard is undeterred and says there will be customer demand.

He said: “If I have a room full of 10 people, eight out of 10 would love to go to space if they could afford it.

“So I think the market for people who would love to become astronauts and go to space is gigantic.

“And it is up to us to produce as many spaceships as we can to cater with that demand.”

Despite several setbacks along the way, including the fatal crash of one of its proposed jets in California’s Mojave Desert which killed the pilot three years ago, 700 tickets have already been sold for a trip into space on a Virgin Galactic craft.

Among the buyers Hollywood A-listers Brad Pitt and Ashton Kutcher.

Virgin Galactic will get people into space using slightly different means than the likes of NASA and SpaceX.

No rocket will be required for launch, instead a plane – known as the VSS Unity – will launch as normal and carry another vessel.

When the plane reaches space, the vessel will detach and propel itself higher into space before both return to Earth – albeit at different times.

While Sir Richard says that he will have humans in space next year, Mr Musk has set a target of 2030 to get people to Mars, with the first people there being tasked with beginning to build a new civilisation.