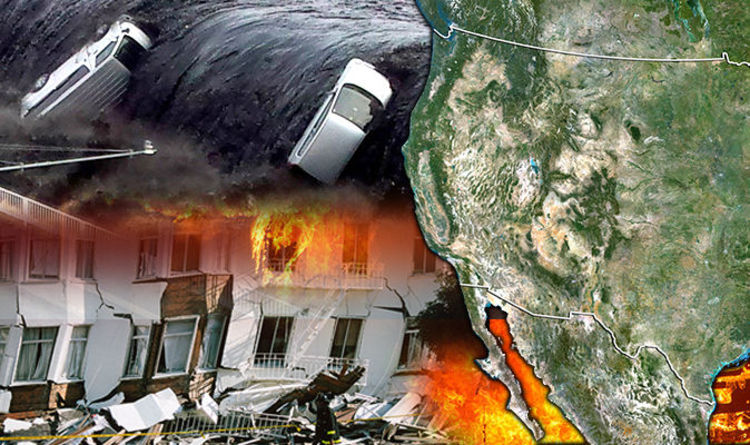 
The west coast of the United States is described as being “built on a time bomb” as it sits along a series of fragile fault zones, including San Andreas fault and the the Cascadia subduction zone.

And it is just a matter of time before the Cascadia zone, along the Pacific Ring of Fire, snaps, unleashing earthquakes which could measure up to nine on the Richter scale and monstrous tsunamis, experts say.

The Cascadia subduction zone is thought to generate a huge quake every 200 to 530 years. The last one arrived in 1700.

And experts believe it is now just a matter of time before the next disaster strikes.

“The whole Pacific Northwest is very, very fragile. Essentially our cities are turn-of-the-century cities built on a time bomb.”

Matt Caesar at the region’s FEMA headquarters in Bothell, Washington, added that when this happens, building will start crumbling.

He said: “When the skyscrapers start swaying…well, a lot of them are designed to have their windows pop out.

What is perhaps most shocking is that when the quake does happen, the entire region will slide some 30 feet towards the Pacific ocean.

If that alone does not destroy everything on the west coast, then the resulting tsunami which could realistically be up to 100 feet high could finish the job, according to Dr Goldfinger.

Dr Goldfinger added: “Then suddenly you’ve got a bay full of fishing boats, refrigerators, cars and everything else.

“And it’s like a glacier of debris that’s just kind of sloshing back and forth.”

The difference between Cascadia and San Andreas is that the former is a subduction zone, where plates lie on top of each other, whereas in the latter they sit diagonally.

As a result, subduction zone faults can cause much more damage as one plate literally drops off of the other.

The Planning Manager for Seaside, Oregon, Kevin Cupples warned that there is not much that can be done to prepare for the inevitable tragedy.

Dr Goldfinger agreed: “We could literally have it right now. And we’d be looking around, saying ‘okay, I guess this is it.'”