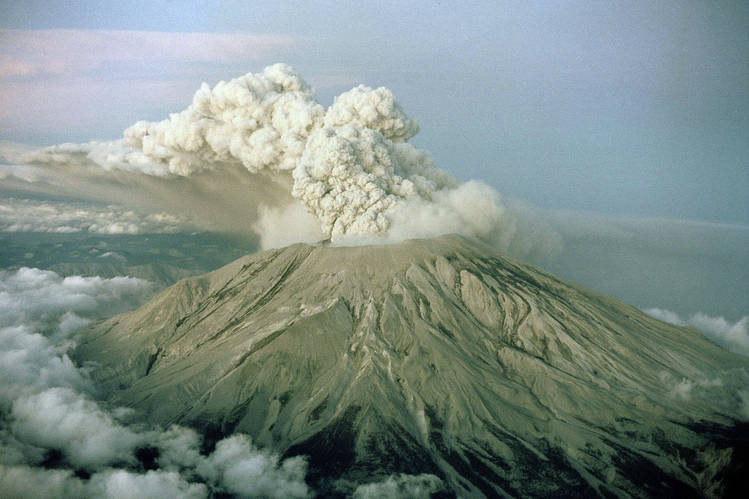 
The series of powerful earthquakes that shook Southern California in July prompted understandable concern about whether the region is prepared for a period of possibly more active seismic shifts.

It also generated, however, a viral wave of apocalyptic warnings that a “supervolcano” in Yellowstone National Park, a few states away, was about to erupt and plunge the world into darkness in a colossal explosion of lava and ash. But mountains to the west pose the true dangers.

Such claims, which have surfaced periodically in recent years, generally take the form that Yellowstone is “overdue” for a major eruption (it isn’t), that worried park officials are evacuating tourists (they haven’t) and even that herds of bison are frantically fleeing the park after sensing an impending blowup (not so far). “Yellowstone seems to have cornered the market on that sort of thing,” says geophysicist Michael Poland, the scientist-in-charge of the Yellowstone Volcano Observatory, a multiagency group that monitors seismic and volcanic activity in the park.

It’s true that Yellowstone sits astride a giant “hot spot” of magma that over the past two million years has produced “supervolcano” eruptions that spewed out hundreds of cubic miles of ash and other materials, the last one around 630,000 years ago. That magma provides the heat that gives us Old Faithful and some 10,000 other hydrothermal features in the park. But for a variety of sound geological reasons, Dr. Poland and other scientists say that the chances of a super-eruption in our lifetimes, or even in the next thousand years, are slim to virtually nil. Even if an eruption did occur, it likely would be a localized lava flow, not a world-threatening super-explosion.

There is a serious volcanic threat in the contiguous U.S., but it isn’t in Wyoming. It lurks hundreds of miles to the west, inside the snow-capped, picture-postcard peaks of Mount Rainier, Mount Shasta, Mount Hood and others. They might look like ordinary mountains, but in fact they are volcanoes—and potentially dangerous ones.

In 2018, the U.S. Geological Survey released an updated version of its “National Volcanic Threat Assessment,” which reviewed the volcano dangers in the U.S. based on the likelihood of eruptions, potential destructiveness, nearby population densities and other factors. The report listed 161 volcanoes in a dozen U.S. states and two overseas territories (American Samoa and the Northern Mariana Islands) and ranked them in categories ranging from “very low threat” to “very high threat.”

Hawaii’s Kilauea volcano, which erupted last year, ranked as the No. 1 “very high threat.” Hawaii’s Mauna Loa volcano and five Alaskan volcanoes were also in that category. Of the 18 U.S. volcanoes designated as “very high threat,” the other 11 are situated in California, Oregon and Washington. Washington’s Mount Rainier, near Seattle, which has erupted dozens of times in the past 10,000 years, ranked No. 3; California’s Mount Shasta, which last erupted about two centuries ago, ranked No. 5; Oregon’s Mount Hood ranked No. 6. Yellowstone, by contrast, was ranked No. 21, and didn’t make it into the “very high threat” category.

To be clear, a “very high threat” ranking doesn’t mean that any particular volcano is going to erupt next week, or next year, or even within the next century. It simply means the effects of the volcano erupting could be devastating and that the volcano requires careful monitoring. But there’s no doubt that another California-Oregon-Washington volcanic eruption will happen sometime, with potentially catastrophic results.

This isn’t hypothetical; we’ve already seen firsthand what kind of damage an explosive volcanic eruption can inflict on the western U.S. The 1980 eruption of Washington’s Mount St. Helens was only a moderately violent explosion as volcanic eruptions go, but it killed 57 people, destroyed more than 200 square miles of forest and covered much of the Northwest in a blanket of ash. Today Mount St. Helens still ranks No. 2 in the “very high threat” category.

The Mount St. Helens eruption reminded us in the most dramatic way possible that American volcanoes aren’t confined to exotic and far-flung locales like Hawaii or Alaska. It was a reminder, too, that volcanoes that have been dormant for hundreds or even thousands of years—Mount St. Helens had been quiet for more than a century—can suddenly come back to life. “Dormant” simply means “sleeping,”and things that are sleeping usually wake up eventually.

Eleven of the 18 ‘very high threat’ U.S. volcanoes are in California, Oregon and Washington.

The question, of course, is when

Precursor events such as increased seismic activity and gas emissions can indicate that a specific volcano is ready to blow, which is why we need more and better volcano monitoring systems. After more than a decade of effort, earlier this year Congress finally passed legislation to create a National Volcano Early Warning System, which will upgrade and unify the nation’s various volcano monitoring programs.

But long-term volcano predictions are much more difficult. For example, based on the geologic record of eruptions over the past 5,000 years, the USGS estimates there’s about a 16% chance of a small-to-moderate volcanic eruption occurring somewhere in California sometime in the next three decades. That’s pretty vague, but right now it’s their best estimate.

Get out of its way

In most cases, the only thing humans can do in the face of an erupting volcano is get out of its way. To that end, some high-volcano-threat states have developed extensive emergency warning systems and evacuation plans, particularly for people who are in danger from lahars, the massive volcanic mudflows that can travel many miles and destroy everything in their paths. In May, some 8,000 students and others in the city of Puyallup, Washington (population 42,000), which is in a Mount Rainier lahar danger zone, participated in what was billed as the largest volcano evacuation drill ever held in the U.S.

Clearly, the home state of Mount St. Helens takes this seriously. “Around here, volcanoes are part of the culture,” says Brian Terbush, the volcano program coordinator for the state’s Emergency Management Division.

Elsewhere, however, alerting the public to the volcano threat can be a tough sell. “It’s a little difficult in California, because there’s been no eruption here in living memory,” says USGS volcanologist Jessica Ball of the California Volcano Observatory. The last eruption in the state occurred at Lassen Peak in northern California a hundred years ago. Meanwhile, Californians are already besieged by other, much more frequent natural disasters such as earthquakes, wildfires and mudslides. Still, Ball says, “We’ve been trying to spread the word to make people aware of the (volcanic) hazards they might have to deal with in the future.”

The volcanic threat is very real for many Americans, mostly in the states of Oregon, Washington and California. Be prepared.

This article was first published in The Wall Street Journal: https://www.wsj.com/articles/volcano-threats-are-hiding-in-plain-sight-11565362056

Losing Focus May Actually Boost Learning, Study Finds : ScienceAlert
Dogs Can Be Aggressive For Lots of Reasons, And One of Them Is You : ScienceAlert
Sword Mistaken For Replica Is Actually An Ancient 3,000-Year-Old Weapon : ScienceAlert
An Iceberg The Size of London Has Broken Free From Antarctica Ice Shelf : ScienceAlert
Dozens in 7,000 Year Old Mass Grave Were Carefully Decapitated After Death : ScienceAlert