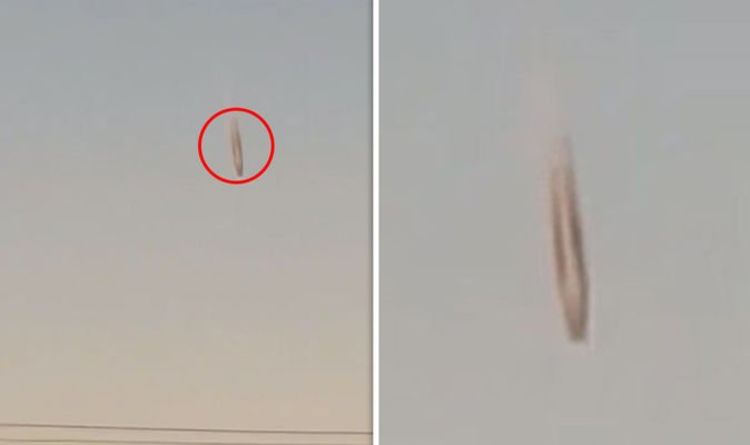 
The mysterious falling object spotted close to a secretive US army base has left US Air Force officials scrambling for an answer. Shocking footage taken this week showed a mysterious object plunging towards the ground with a trial of smoke behind it. The video clip also shows what looks like a light guiding its way through the sky.

When locals in Anchorage, Alaska suspected the involvement of the local US military base, the Air Force stepped in to deny these claims.

Spokeswoman Erin Eaton, of the nearby Joint Base Elmendorf-Richardson, said the sighting was not linked to any test or experiment at the base.

The base operates the latest stealth fighter jets and command planes.

She said: “That doesn’t look like any of our planes.”

Officials from the Federal Aviation Administration confirmed that the object in the video was not an aircraft.

The FAA added that it hadn’t received any reports of aviation issues at the time.

Despite repeated denials of military involvement, Peter Davidson, director of the Washington-based National UFO Reporting Center, said that the video showed “a high-altitude jet airliner, with a contrail behind it”.

He said: “It is in level flight, but because it is flying away from the camera, it appears to be falling.

”It is not, but parallax makes it look that way.”

Adonus Baugh, the 18-year-old who shot the video, rejected this explanation.

He said: “Me and my mom were just coming in to the parking lot of our house and that’s when I noticed that something was falling from the sky.

”I thought it was a meteor or something coming into the atmosphere.

Another witness, Bebe Kang, added: “It didn’t look like an airplane or one of those jets. It was big, super slow and red.

“I really just thought it might be an asteroid.”

The First People to Settle in The Americas Brought Their Dogs With Them
Giant Predatory Worms Once Roamed The Ancient Seabed, Scientists Say
Mind-Blowing Video Reveals The Formation of Salt Crystals From Individual Atoms
Stunning Video Reveals Mount Etna Erupting, as Europe’s Largest Volcano Lets Loose
One of The Largest Whale Carcasses Ever Found Has Washed Up in Italy