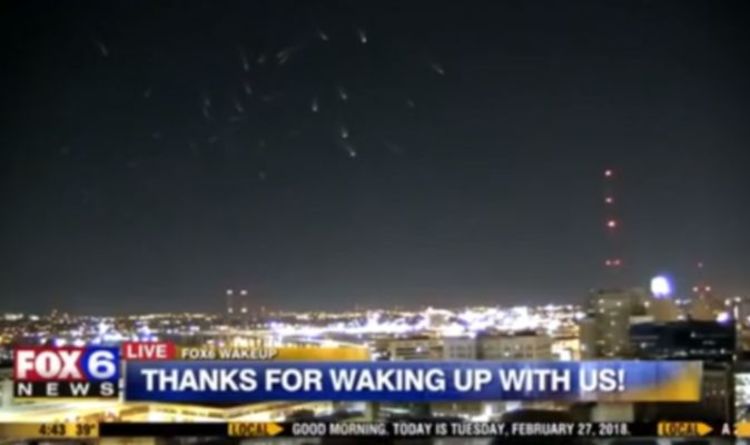 
They were seen by a shocked presenter who said: “Are those fireworks?

Her co-host replies: “What the heck is that?

“I’m actually, er… It’s getting weirder by the second. They’re sticking around.”

“We’re going to do some digging, find out what they are.”

After being uploaded to YouTube the clip was viewed hundreds of thousands of times with viewers left just as baffled.

One person posted on YouTube: “Saying there are no aliens in the universe is like scooping a cup of water out of the ocean and saying there is no fish.

However, the case appears to have been solved as nothing more than a flock of seagulls and a camera anomaly.

Scores of online debunkers came forward to explain what was happening.

In a debate about the video on website Reddit users gave a more rational explanation for the phenomenon.

One user posted: “They are seagulls, they look funny because the shutter speed of the camera is lower longer than the frame rate (to help brighten the night shot), so it give the funny trail effect,” read the comment.

“If you notice, the cars on the highway also have the same trailing effect that the seagulls have.”

Even UFO believer Tyler Glockner, of YouTube channel Secureteam10, who has put forward an array of videos as proof of alien UFOs, accepted in a video he made that they were birds.

Despite the consensus this was not an alien visitation, many people refused to accept they were birds.

Mr Glockner even came under fire from his own followers for making the claim.

One said: “It’s like a cover up video. You have no idea it is birds and you are playing it down.”

Another said: “This guy is quick to shout aliens for every single video or how he scoffs at every official explanation then the recent video comes out that is definitely unidentified and he says its birds!”

What Can They Actually See? : ScienceAlert
Scientists Discover a Weird New Form of Ice That May Change How We Think About Water : ScienceAlert
A Splash of Milk in Coffee May Have Health Benefits We Didn’t Know About : ScienceAlert
Ancient Goo Spills The Secrets of How The Egyptians Mummified Their Dead : ScienceAlert
We Used to Hate Commuting. Now We Realize We’ve Lost Something. : ScienceAlert