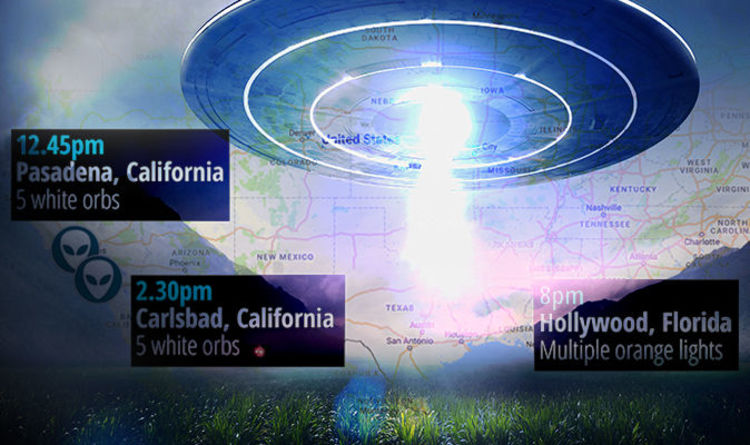 
Details of the sightings have been reported to the National UFO Reporting Center (NUFORC), based in the US, which investigates and records such sightings.

One incident happened at 12.45pm in Pasadena, California, when at least five “circular UFOs” were seen.

The unnamed witness said in a report to NUFORC: “My cousin went outside to throw away the trash after we finished eating breakfast.

“He then returns and tells everyone that their are UFO’s outside.

“I thought he was joking but his wife went outside to look first my wife followed and then my kids and I followed.

“I looked up and in the sky I saw shiny dots in the sky. I observed the objects and then returned inside to get my iPhone to document what I saw.

The witness later saw a father and son, and showed them the objects in the sky.

He said: “I asked if they looked like drones. He replied, ‘No Way’.

“I observed planes in the air and compared them to what I saw and the objects were much higher. “The objects seemed to hover and remain still. One was slowly moving as the others remained still.

“I was able to observe the UFO’s for close to an hour.”

“High-quality video footage of the event accompanied the written report.

“Our initial thought was that the objects might have been seagulls soaring in upwelling wind, but the objects do not appear to look, or behave, like birds.”

He said he believes they were just a group of helium balloons that had been caught on the wind and were slowly rising away.

The second sighting was at 2.30pm, also on January 13, about 90 miles to the south in Carlsbad, California, when five oval or circular orbs were seen.

The witness was testing out new binoculars.

He wrote to NUFORC: “While I was scanning some edges of a few clouds and some contrails looking towards the west over the ocean around 2.30pm, I noticed one very outstanding whitish looking object, between egg and football shaped but sometimes looking more round and other times having more of a top shape.

“I had to assume that possibly the changing viewing angle had something to do with shape change although at times the object seemed to either be vibrating or rotating.

“That object suddenly appeared and was very slowly moving towards the ocean and back nearly directly overhead just above where I live.

“As I continued watching I noticed another object moving very slowly, coming directly out of the setting sun direction and moving very slowly in direct horizontal line towards the first object in what looked like a collision course.

“These objects went from a white colour to sometimes a shimmering metallic or reflective mylar look but it wasn’t solid looking when it began shimmering it seemed to flash as if it had multiple surfaces.

“As I continued to view the two objects I watched a third that seemed to drop down from above my focus to an altitude similar to the other two objects and north of them again the three manoeuvred back into a horizontal line with quite a bit of distance between each other.

“After that manoeuvre, they then broke the line and moved closer to form a triangular formation and slowly moved out towards the ocean and then back towards my viewing position.

“After watching these slow manoeuvres for some time I noticed a fourth and fifth object materialising or moving from very high in the sky down towards the other objects and as these other two became about the same size as the others they all formed another horizontal line from north to south, evenly spaced, and kept that formation for a short while.”

Then, at around 8pm the same day more than 2,000 miles away in Hollywood, Florida, there was another sighting of “numerous orange lights above the coastline,” by a law enforcement officer.

It said: “NUFORC is attempting to determine what the wind direction and velocity were at the time of the sighting, in attempt to rule out the possibility that the lights may have been sky lanterns, or so-called ‘Chinese’ lanterns.”

Chinese lanterns are often mistaken for UFOs as they drift in groups before disappearing as the internal flame goes out.

Mr Brando said the second sighting in Carlsbad was likely to be the same helium balloons travelling south.

He believes the objects seen in Florida were Chinese lanterns and unrelated.

Plants Have Been Keeping a Secret From Us About How Thirsty They Actually Are : ScienceAlert
Researchers in South America Discover a New Species of Tiny but Tough Dinosaurs : ScienceAlert
Jupiter’s Ice Moon Europa Probably Has Upside Down, Underwater Snow : ScienceAlert
Scientists Say ‘space Bubbles’ Could Shield Earth From The Sun, But Would It Work? : ScienceAlert
Why Do Kids Get Worms, And What Can You Do to Prevent It? : ScienceAlert