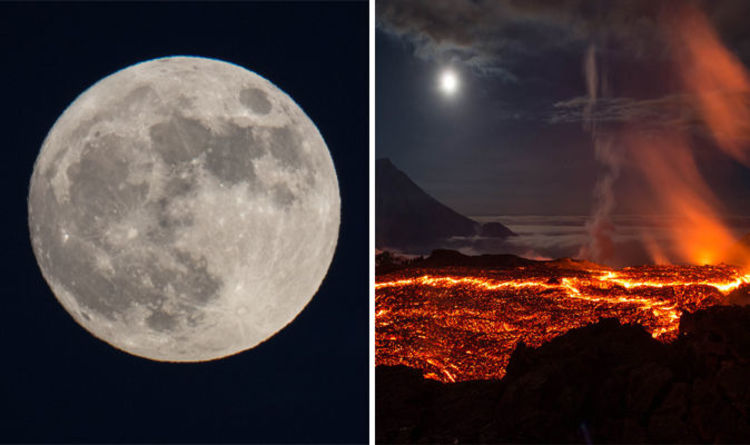 
The gravitational pull as the Earth becomes situated between the moon and the sun will wreak havoc on our planet, they claim.

Doomsday predictors believe that this will spark volcano eruptions across the globe which could leave our planet almost burnt to a crisp.

Website Kicker Daily News explained: “During a Blood Moon event, in other words, a Lunar Eclipse (the Earth is between the sun and the moon)… try to imagine if you are the Earth, and you are being pulled by strong forces (Sun and Moon) from opposite directions.

“If you are a magma-carrying body or let’s say a balloon and you are being pulled, your ‘skin’ would be distorted, or moved (earthquake) and the precious magma inside you would escape from exit spots (volcanic eruption).”

A Blue Moon gets its name when it is the second of two full moons to appear in the same calendar month.

During this time-frame, the moon will have a red tinge to it, giving it the name the blood moon – this is due to the fact that Earth’s atmosphere bends the light from the sun as it reaches the moon.

Some Christians have linked it to the end of the world.

Followers of Christ point to a verse in Luke 21:25-26, which says the end is near when the signs appear.

According to the verse, Christ says: “And there will be signs in Sun and Moon and stars, and on the Earth distress of nations in perplexity because of the roaring of the sea and the waves, people fainting with fear and with foreboding of what is coming on the world. For the powers of the heavens will be shaken.”

Wesley Baines of Christian site belief.net said: “Whatever the case, when the sky darkens and the stars disappear and the moon becomes red as blood, you will know that Christ is near.”