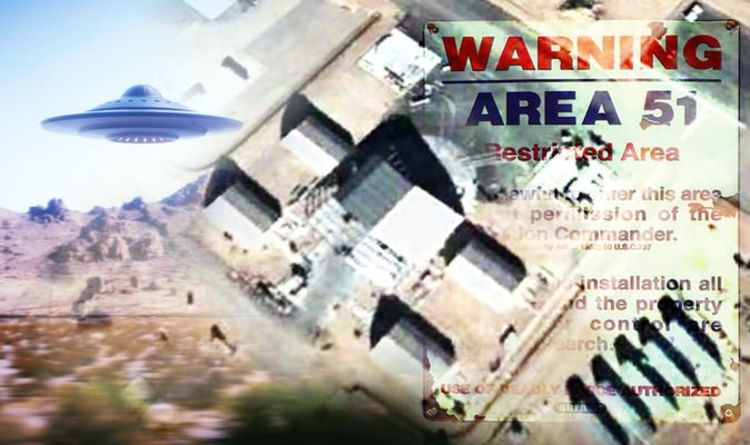 Area 51 is the top-secret US Air Force facility based at southern Nevada’s Groom Lake. The isolated air base has long fascinated conspiracy theorists who believe it to be where the US government hides alien bodies and UFOs. Now a 2010 Google Maps aerial image purporting to show a UFO half-hidden under a hanger has resurfaced, further fuelling the supposed evidence of extraterrestrials.

Self-styled ET enthusiast Scott Waring took to his etdatatbase.com blog to speculate about his highly-dubious discovery.

You can see this UFO parked underneath this hanger

Mr Waring said: “They actually built this whole thing for a disk they already had.

“Maybe they flew it over from Area S4 or something.

“You can see this UFO parked underneath this hanger.”

The circular-shaped object is seen to be connected to tubes resembling air conditioning units.

Mr Waring added: “I was at a strategic air command base, the highest security base for the air force, and they don’t have hangers like that.

“None of the hangers have a round door.

“So what is this and why are there four different air conditioning units hooked up to this?

“I have never seen that many air conditioning units hooked-up to a hanger before.”

The apparently round shape is found to have a diameter of 33 metres (108ft).

Mr Waring continued: “Some people say this is Area S6, others it is Area S4.

“But it really doesn’t matter what we call the area – what matters is we have found a UFO there.”

UFO sighting: Does this photograph show a UFO half-hidden under a hanger? (Image: Google Maps)

The alien life enthusiast concluded his spurious report by attacking Google for classifying his UFO finds as “fake news”.

He said: “I reported this UFO a long time ago, in 2010, but now Google’s algorithm is attacking us.

“Google’s algorithms are attacking all us UFO researchers everywhere.

“YouTube is attacking anything they believe to be fake news.”

Liz M wrote: “Truth be known, if Google had NEVER stepped in your channel would have SEVERAL million SUBS by now!”

Jocelyn Webb appeared to agree, commenting: “They try to censor us but with your help the word is getting out.”

However, Doom Punk is less than convinced by Waring’s bizarre claims, commenting: “The circular area that was in question was just newer formed concrete following the curve of the new hanger during construction.”