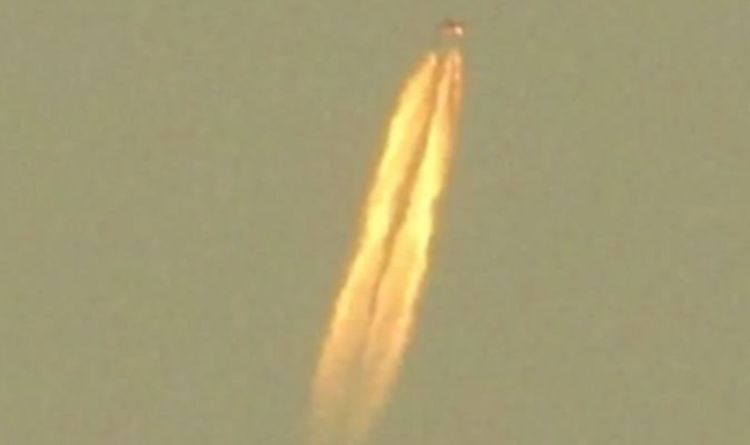 
Early risers on New Year’s Day were treated to a shocking sight when they noticed a mysterious object shooting through the sky. Along Treasure Coast beach in Florida, what looked like a rocket or missile with a fiery trail behind it was photographed by onlookers. A former Strategic Air Command historian may have cracked the mystery as he offered a possible explanation.

WPTV reporter Matt Sczesny spoke to witnesses who were convinced they saw some kind of missile or rocket out on the beach.

He said: “NASA had no scheduled launches today.

“We couldn’t get through to the Pentagon for a comment on this.

“But again, the many who saw it out on the beach earlier this morning were very surprised.”

Local photographer, John Simard, said he saw it “just south of due east” right before the sunrise on the beach in Fort Pierce.

He told WPTV: “It looked like a fiery trail going up out of the ocean.

“I started firing off pictures, and then I noticed a speck of light above the cocktail so I zoomed in.

“I was able to get a couple of pictures of what clearly appeared to be some kind of rocket going up, or missile.”

Two Black Holes Met by Chance, And It Created Something Never Seen Before : ScienceAlert
Alzheimer’s Gene Doesn’t Guarantee Dementia. Here’s What You Can Do to Reduce Risk : ScienceAlert
Do You Need to Drink Eight Glasses of Water a Day? It’s Complicated : ScienceAlert
Octopus Brains Evolved to Share a Surprising Trait in With Our Brains : ScienceAlert
Chilling Glimpse Into Our Future if We Survive Another Million Years : ScienceAlert