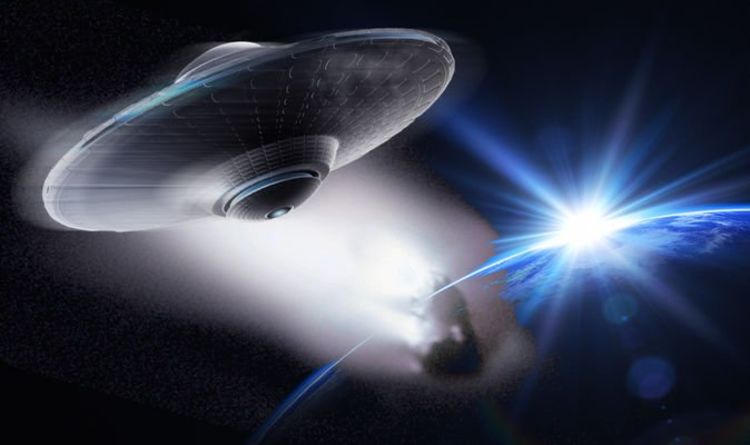 
Alien life conspiracy theorist Scott Waring took to his etdatabase.com blog to speculate about the bizarre claim about Comet Halley, also known as 1P/Halley. He said: “Guys, I hate to break it to you, but Halley’s Comet is an alien spaceship.

“The apparent space anomaly is actually flying front to back.

“And this is a very unusual thing for a UFO to do.

“The alien ship is flying at an odd tilt, pointing the UFO’s top towards its destination and its floor toward the Comet’s famed tail in an attempt to disguise itself.

“The spaceship’s alien owners have exploited science to camouflage the UFO as a comet.

“We, the lower species, consequently believe the cutting-edge alien tech is only a space rock.”

The image of the eerily white Comet Halley, strikingly shot against the blackness of space, was taken in 1986.

Almost 25 years ago the European spacecraft Giotto became one of the first spacecraft ever to encounter and photograph the nucleus of a comet, passing and imaging Halley’s nucleus as it receded from the Sun.

The comet occasionally passes Earth in its wide orbit and it will next pass our planet in 41 years and six months from today – July 27, 2061.

Psychologists Found a Weird Trick That Changes How Food Tastes : ScienceAlert
An AI Found an Unknown ‘Ghost’ Ancestor in The Human Genome : ScienceAlert
It Sounds Crazy, But Walking Backwards Is Really, Really Good For You : ScienceAlert
Giant Asteroid Unleashed a Devastating Martian Megatsunami, Evidence Suggests : ScienceAlert
Mysterious Tendrils Inside The Brain May Control Our Perception of Time : ScienceAlert