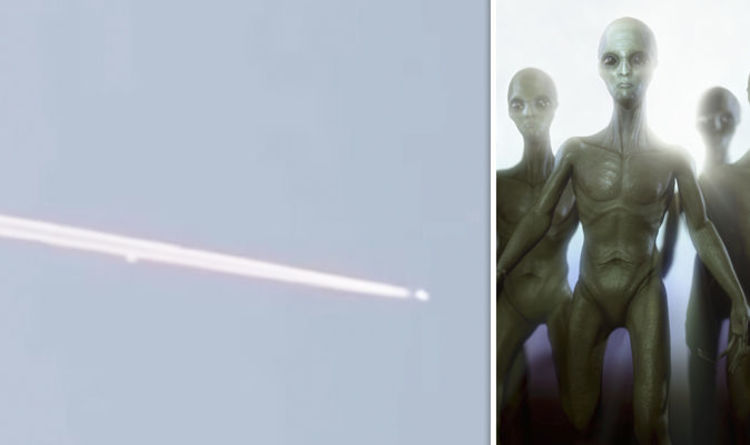 
The video shows a jet in “hot pursuit” of another craft in the sky that was claimed to be “some of the best evidence” of UFO’s by YouTube channel “thirdphaseofmoon”.

The man who filmed the craft stated that he did a “double take” as soon as he saw looked into the sky in New Hampshire.

He stated: “I was reading on my deck around 7 o’clock.

“I am told that military pilots train in the mountains around where I live and I’ve always enjoyed seeing them fly through.

“This happens all the time, jets and helicopters are a common sighting. So I naturally saw the jet and did a double take, because there was something following it.

“I immediately thought I was witnessing some strange aircraft, possibly military but it was not a jet.

“I knew it wasn’t a jet because it was actually right behind one. The jet it was chasing left a long contrail behind it, but the UFO did not.”

The witness added that the “UFO was gaining on the jet” and declared that he was “blown away” by the incident.

He went on: “The UFO was gaining on a jet. No helicopter could do that. I was blown away and luckily got out my phone in time to take a video.”

The footage is believed to have been taken in 2016, but has surfaced for public viewing for the first time on YouTube.

The cameraman stated that it would be “very hard” to write off the incident as a “weather balloon” or another aircraft.

He went on: “I watched the object gaining on the jet for about 10 seconds when I lost them in the trees.

“I was very excited and anxious. I felt I have witnessed something very hard to dismiss as a ‘weather balloon’ or some obvious type of aircraft.

“Shortly after the jet and object left my range of sight I saw three more jets and 1 helicopter going the same direction, in my opinion, chasing the UFO.”

YouTube viewers were decidedly split on the footage that claims to prove the existence of UFO’s.

One commented: “Great evidence…keep your eyes on the skies…the truth will come from above..eyes open!”

Another wrote: “Could it not be another jet?”

Dogs Can Be Aggressive For Lots of Reasons, And One of Them Is You : ScienceAlert
This Species of Carnivorous Plant Evolved Into a Toilet And Is Now Winning at Life : ScienceAlert
Scientists Have a Plan to Turn Earth Into a Giant Observatory : ScienceAlert
Our Body Temps Have Been Dropping For 160 Years. Gut Microbes May Be Playing a Role : ScienceAlert
Dozens in 7,000 Year Old Mass Grave Were Carefully Decapitated After Death : ScienceAlert