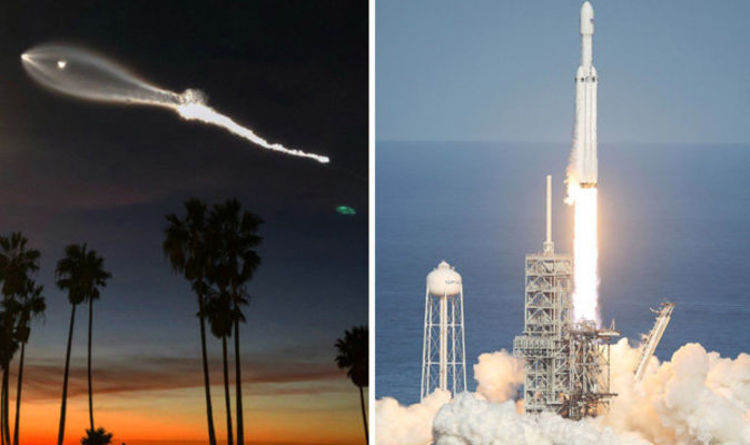 
Some of them say they have seen something very strange in the video and one viewer posted on YouTube: “My thought was a trans atmospheric skip vehicle, but I could just be hopeful.”

Another excitable conspiracist asked: “Is that aliens!!! What is this?”

Others were more sceptical, saying the mysterious dark object is most likely a satellite or even a piece of space junk.

One said: “It might even have just been another satellite in orbit. With all the c**p that’s up there, it’s far more likely that it’s debris or something that’s been in orbit for awhile than it was something secret.

“Tbh with every launch or space station video there’s always a UFO sighting on the video.”

SpaceX founder Mr Musk blasted his own cherry-red 2008 Tesla roadster with a dummy astronaut driver into space on the launch as he takes one step closer to putting humans on Mars.

The Tesla roadster now heading for the red planet.

The powerful rocket launched from the Kennedy Space Center in Cape Canaveral, Florida, before breaking out to into space.

The planned trajectory would have put the Tesla out to the distance of Mars’ orbit.

But the Falcon Heavy carrying the vehicle turned out to be much more powerful than expected – making it the world’s most powerful rocket.

He said: “In my opinion it’s impossible to identify a black dot passing over the Earth.

“It could be anything: satellite, space junk, a debris from the Falcon Heavy. Impossible to say what is it but this doesn’t mean we are seeing a UFO.”