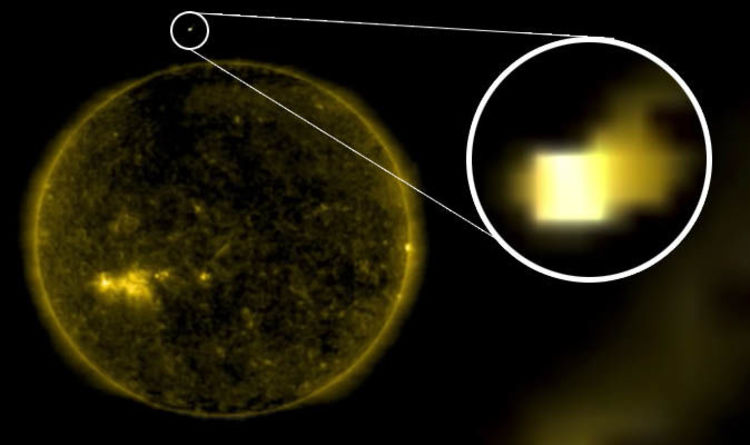 Popular UFO expert Scott Waring first encountered the “alien cube” on October 2, when he saw a bright spot of light escape the Sun.

He discovered the object in a photo of the Sun, snapped by NASA’s Solar and Heliospheric Observatory (SOHO).

Mr Waring interpreted this “mystery” object as an example of advanced alien technology, roughly the same size of the Earth.

The pixelated object pulled from NASA’s photos appears to be square in shape, with a long wispy trail of smoke or gas behind it and a white-to-yellow glow around it.

Mr Waring said: “The UFO is huge since the Sun is 109 times the diameter of the Earth.

“This UFO is an exact match in size and yet it shot away so fast that it was not captured on any other photos.”

The UFO hunter now believes he has caught the alien cube on its return trip to the Sun, documenting it on Tuesday, October 16.

Mr Waring said: “This is magnificent. This thing this cube – look at the shape of it, look at it – it is perfect.”

NASA’s SOHO Science Archive, where Mr Waring found the alien cube, is a downloadable program which lets anyone trawl through NASA’s archive of Sun photos.

The archives contain a mix of real-time data and solar telemetry with images and movies of the Sun.

Mr Waring said of his latest finding: “Do you see that? It left the Sun before, carrying fragments with it.

The NASA photograph has since sparked interest online with people commenting on its authenticity.

Thomas Mundt, who saw the supposed alien spacecraft on Mr Waring’s YouTube channel, praised the UFO hunter for his discovery.

He wrote: “Excellent find again Scott. It’s when you provide proof like this Scott, then this is why they closed down the observatories.

“There are many many more UFOs out there. Thanks for sharing.”

The alleged UFO is roughly the same size as the planer Earth (Image: SCOTT WARING YOUTUBE)

Another person, Cassie Henderson, simply said: “That is nuts.”

But what are the odds of a spacecraft being able to withstand the immense heat radiating from the burning heart of our solar system?

According to the California Institute of Technology (Caltech), the surface temperature of the Sun burns at a scorching 5,600 Celsius (10,000 Fahrenheit).

Deeper towards the Sun’s core and the temperatures spike up to 15 million Celsius (27 million Fahrenheit).

Mr Waring thinks the UFO is a giant cube dipping in and out of the Sun (Image: SCOTT WARING YOUTUBE)

It is hard to imagine any sort of spacecraft could survive near these conditions, let alone dive into the Sun.

The closest a human spacecraft will ever get to the Sun is the NASA Parker Solar Probe, which will approach as close as 9.86 solar radii from the centre of the star.

At its closest, the NASA probe will fly about 3.8 million miles from the Sun and will have to withstand heats of around 1,377 Celsius (2,500 Fahrenheit).

In order to survive these incredibly deadly conditions, the probe is armed with a 4.5-inch-thick carbon-composite heat shield.

A Nuclear War Could Starve Billions, But One Country May Be Safer Than The Rest : ScienceAlert
Jupiter’s Ice Moon Europa Probably Has Upside Down, Underwater Snow : ScienceAlert
Astronomers Charted The Sun’s Life, And This Is How The Story Ends : ScienceAlert
Plants Have Been Keeping a Secret From Us About How Thirsty They Actually Are : ScienceAlert
Scientists Have Found A New Way to Detect Alien Worlds Beyond Our Solar System : ScienceAlert