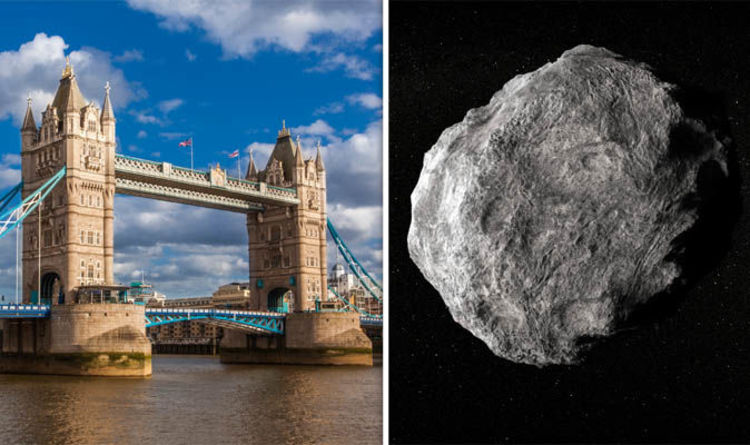 
The space rock will make a so-called Earth Close Approach 63 years after the asteroid last passed the planet.

At 226ft, the asteroid is taller than the iconic Tower Bridge in London and about 1.22 times the height of the Leaning Tower of Pisa in Italy.

Even at just 101ft, the asteroid is still considerably large and is 1.5 times longer than the average cricket pitch.

Impact with an asteroid this big could be potentially catastrophic, as demonstrated by the 2013 Chelyabinsk meteor incident, which injured 1,000 people in Russia.

The Russian asteroid was estimated to only measure around 65.6ft (20m) in size.

Thankfully, NASA expects Asteroid TZ2 to safely pass the Earth from a distance of about 0.02324 astronomical units (au) or 9.05 Lunar Distances (LD).

An astronomical unit is the equivalent of the average distance between the Earth and the Sun and is used as a reference point for distances in space.

Lunar Distances follow the same principle but refer to the distance between the Earth and the Moon.

The approach puts the asteroid squarely within the brackets of a so-called Earth Close Approach.

The European Space Agency (ESA) labels Earth Close Approaches as an asteroid or comet that comes “within 0.05 au of Earth”.

NASA explained: “As they orbit the Sun, Near-Earth Objects (NEOs) can occasionally approach close to Earth.

NEOs are all asteroids and comets whose orbits bring them close to the Earth – typically less than or equal to 1.3au or 120 million miles (194.4 million km).

NASA said approximately 99 percent of all known NEOs are asteroids, some of which are big enough to be labelled “Potentially Hazardous”.

Once the asteroid safe passes the Earth, NASA’s JPL does not expect another close visit from the interstellar traveller.

The space rock will, however, fly by the planet Venus next month, passing it on the morning of November 20.