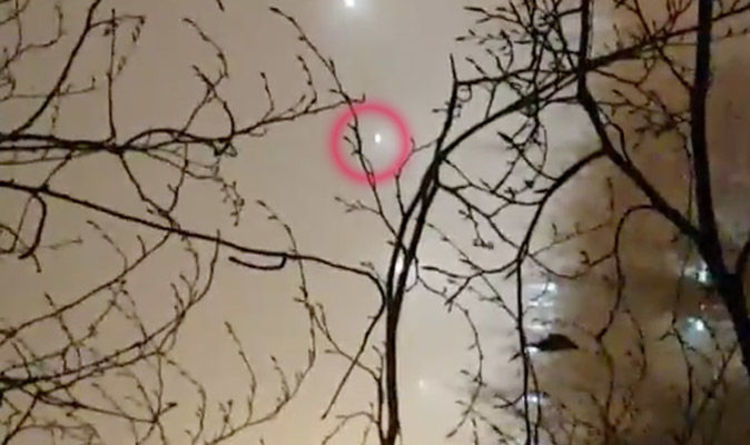 
The witness reported it to the research group yesterday.

The man, who has not been named by MUFON, said he and a colleague saw the lights in the sky while at work.

In a witness report, he said: “I went outside with my workmate to get some materials out of the van and noticed one light slowly move around the back of a building.

“Then another one appeared from behind the building at a set distance that did not change.

“Seconds after another three appeared as if they was already there but were not lit up.”

He said after about a minute, they began to “slowly swing around, as if a crane had lights on it and it turned around 220 degrees.”

He added: “At this point two lights where visible and after another minute or two, the two visible lights got further and further away.

“One stopped and one seemed to carry on barely being a visible light source.”

He said they appeared to swing around again in formation.

The man said: “At this point we ran back inside the building to try and get a better view from the roof.

“With the fog we could not see anything so ran back down at which point they where nowhere to be seen.”

He ruled out helicopters as there was no noise or civilian aircraft as there were no flashing lights.

He added: “It couldn’t have been search lights shining up from the ground as we could clearly see the lights’ surface area getting wider as it shone down meaning the light source was in the sky.

“The sighting lasted around 30 minutes and I managed to take around four minutes of video.”

Basingstoke has become something of a UFO hotspot with a series of mysterious light sightings.

In June 2008 witnesses claimed a fleet of 12 orange objects were seen in the night sky for half an hour.

And in mid 2012 numerous sightings of unusual flashing lights in the night sky were reported over Basingstoke.

In April 2016 Leandro Canetti, then 28, spotted four red, blinking lights in the sky as he finished a gym session near Basingstoke train station.

Separately, MUFON has received five other reports from the town.

In November 2013 a witness report a rocket-like object over the town.

Two months later someone reported a “rectangular black object about the size of a chinook helicopter.”

One New Years Day 2016 someone saw a “large saucer shaped object” and last February someone reported an incident in Basingstoke on July 1 1972 in Basingstoke to MUFON.

They described seeing “a black semi circle with two cut outs at the bottom hovering for 20 minutes, before it dropped a box or canister then vanished.”

Nigel Watson, author of the UFO Investigation Manual, was not convinced they were proof of aliens.

He said: “Initially, they look intriguing, but without more detailed information about the location they probably have a mundane explanation rather than being alien craft.

“To me they look like reflections of the lights on the ground below them, or light sources higher up that are not visible due to the misty conditions.

“In close-up they look like they are moving but from a wider angle it is obviously the movement of the camera is what gives that impression.”