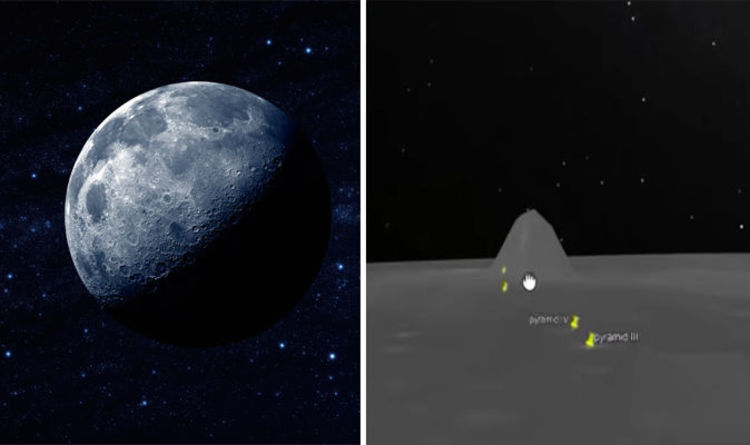 
Conspiracy theorists were sent into a frenzy when a massive structure was spotted on the moon.

Many jumped to the conclusion that it was an alien base or monument, and believe the likes of NASA are covering something up.

In a video uploaded to YouTube by Argentinian Marcelo Irazusta, the man-made-looking structure seems to be an anomaly on the surface on the moon.

A description from Mr Irazusta alongside the video reads: “A strange elevation of hundreds of meters in the middle of a plain of the Moon is a mystery that must be revealed.

“Everything seems to indicate that it could be a non-natural structure. It is really awesome.”

Many people were left baffled by the discovery, believing NASA is covering something up.

One person wrote: “When will people wake up from NASA’s lies?”.

Another added: “What a find – they will have to cover that one up.”

And a third added: “Pyramids on the moon – wow, this could change science.”

However, others were not so convinced, claiming the anomaly was simply rendering issues from Google Moon.

Scientists Just Broke The World Record For The Most Powerful Stable Magnetic Field : ScienceAlert
Scientists Say ‘space Bubbles’ Could Shield Earth From The Sun, But Would It Work? : ScienceAlert
These Asteroid Particles May Be Our Most ‘Pristine’ Sample of The Outer Solar System : ScienceAlert
Robot Shows It’s Possible to Swim Through The Emptiness of a Curved Universe : ScienceAlert
Researchers in South America Discover a New Species of Tiny but Tough Dinosaurs : ScienceAlert